In 1988, following an international competition involving fifteen participants, this project was awarded to the Renzo Piano Building Workshop. One unusual aspect of the competition was that the project was to be carried out upon a site that did not yet exist.

The Kansai Airport also had to satisfy two specific requirements.. from a technical point of view, it had to meet the strict local earthquake and tsunami safety regulations. From an operational point of view, it had to be capable of receiving up to 100,000 passengers per day.
In fact, the Kansai International Airport is situated on an artificial island in Osaka Bay, 40 km south-west of the city and 5 km off the coast, which was specifically built to accommodate the structure. The 4.37 x 1.25 km island was constructed over a 5 year period.

The fact that the runways would be located entirely at sea, meant that the airport could be kept operational 24 hours a day.. it would thus become a major transit route for traffic to Japan, Southeast Asia and Australasia. The island is connected to the mainland by a 3.75 km long, two-level bridge. The upper level contains a roadway, while the lower level contains two independent railway lines. 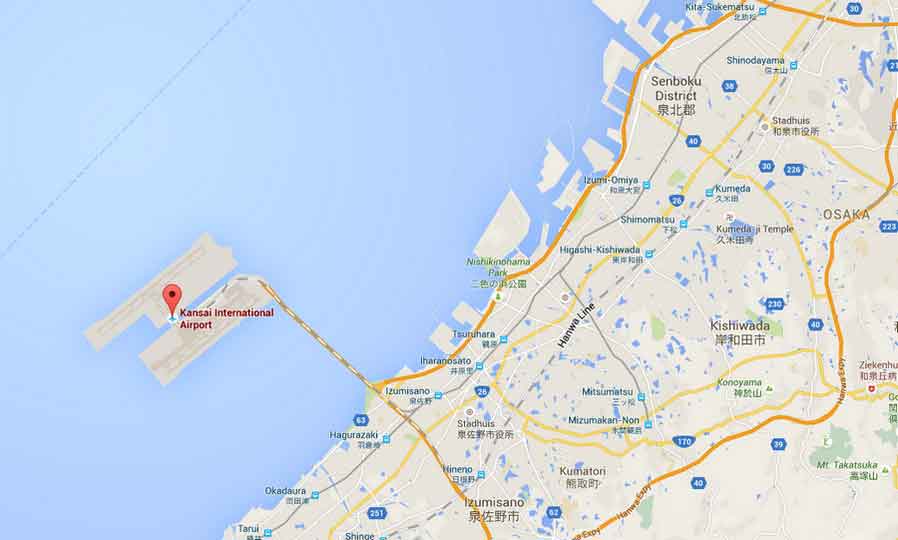 A rather complex solution was required in order to address this problem. A series of special sensors are used to detect when the mud has settled to a point that exceeds the foreseen maximum tolerance of 10 mm. Each column is equipped with a calibration system, which employs the use of extremely powerful hydraulic jacks.. whenever a column's position is offset, the system adjusts it and locks it in its new position. This phenomenon had a significant effect, in fact, during the initial stage.. the island settled by 50 centimetres from 1992 to 1996.

The building, which is 1.7 km long, rests upon the island like a glider. The terminal has 42 different exits. In the absence of any other constraints, the structure's volumes were only determined by the encumbrances and spaces required for the aircrafts' manoeuvres. The planes give shape, function and extension to the building itself. The glider shape can be seen quite well in the layout.. the access roads form the two tail wings, while the structure's main body and terminals represent the fuselage with its extended wings.
The structure has an undulating, asymmetrical layout, although the visible beams are placed at regular intervals. It extends over various levels, which suddenly open up onto a large central atrium.

The shape of the terminal's roof was derived from a lengthy study on the dynamic air flows circulating within the building. This study was carried out in collaboration with Peter Rice and Tom Barker, respectively Ove Arup Group's structural engineer and plant engineer.

The roof's cross section has the shape of an irregular arc (which is actually a series of arcs of different radii). It was given this shape in order to direct the air from the passenger side to the runway side without requiring the use of closed conduits. Blade-like deflectors guide the air flow along the ceiling and reflect the light from above. Thus, all of the elements that would have obscured the view of the structure have been eliminated. 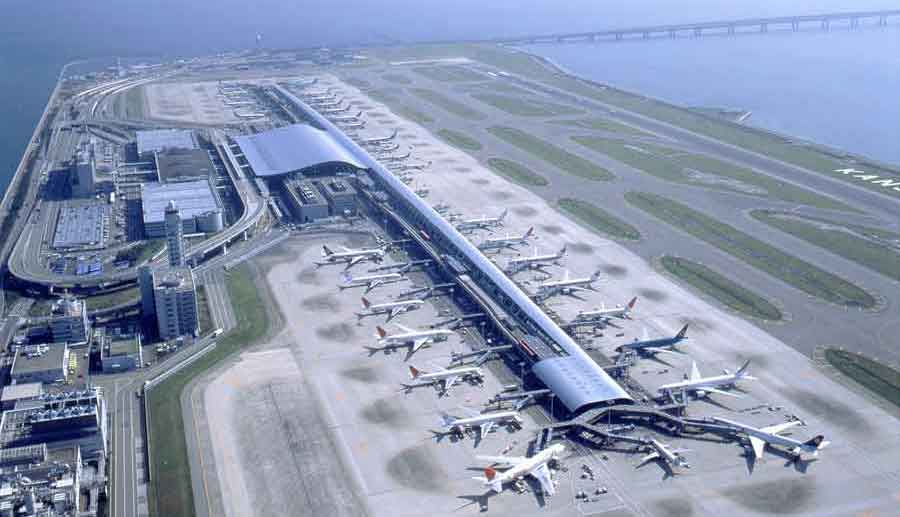 The enormous three-dimensional beams that support the roof are over 80 metres in length. Their asymmetrical profile is designed according to the same calculations that have allowed for the invisible air flow to be properly channelled. These structural studies also inspired the development of a mathematical model that would guarantee the maximum standardization of the components.

The final result is that all of Kansai airport's 82,000 stainless steel panels are absolutely identical (also thanks to the building's overall size, which allowed the curves to be absorbed with low tolerances). The curves of the building's "wings" were also the result of the application of a strict law.. they were defined according to a toroidal geometry. Conceptually, the wings represent the upper portion of a 16,800 metre ring, with a radius tilted at 68 with respect to the horizon, that passes through the earth and emerges over the island. Although this curvature is nearly imperceptible, it was necessary in order to ensure the control tower's lateral line of vision.

The terminal's interior layout is based on a functional study carried out by Paul Andeu for the Aeroports de Paris. The main body of the building that receives the passengers is taller towards the runway side.. 20 metres at one end and just 6 at the other. By forcing the perspective, the human traffic is "naturally" guided in the desired direction. And that's not all.. the asymmetrical structure offers a clear sense of orientation at any given point. Due to the structure's significant size, a shuttle transport system has been installed along the wings.

The airport's construction took 38 months and involved an average of 6,000 workers (10,000 during peak construction periods). The airport was officially inaugurated in June of 1994 and was opened to air traffic on September 4th of the same year.
Sources..
www.fondazionerenzopiano.org/
www.kiac.co.jp/en/

Monument of the Millennium

American Society of Civil Engineers (ASCE) selected Kansai International Airport in 2001 as one of the 10 civil engineering achievements with the greatest positive impact on life in the 20th century.
ASCE selected one project to represent each of the ten greatest achievements in the world including Dams, Roads, Skyscrapers, Airports, and others.
KIX won the award in the Airport Design and Development category. KIX is the first airport located offshore. ASCE comprehensively evaluated not only the technical aspect of the airport construction, but also environmental aspects and the social contribution of KIX.