The Sayano-Shushenskaya Dam is located on the Yenisei River, near Sayanogorsk in Khakassia, Russia. It is the largest power plant in Russia and the 9th-largest hydroelectric plant in the world, by average power generation.

The plant is operated by RusHydro. As of 2009, it was the largest power plant in Russia and the world's sixth-largest hydroelectric plant by average power generation. It provides more than a quarter of RusHydro's generation capacity. The plant operated ten hydro turbines manufactured at the Leningradsky Metallichesky Zavod, each with a capacity of 640 MW at 194-metre head. The total installed capacity of the plant is 6,400 MW; its average annual production is 23.5 TWh, which peaked in 2006 at 26.8 TWh.

The station's constructions include the dam, a power plant building located near the dam, and an additional spillway which is under construction. The arch-gravity dam is 242 metres high. It has a crest length of 1,066 metres, crest width of 25 metres, base width of 105.7 metres and maximum head of 220 metres. It consists of a solid left-bank dam 246.1 metres long, a power dam 331.8 metres long, a spillway dam 189.6 metres long and a solid right-bank dam 298.5 metres long. It is by far the larger of only two gravity-arch dams in Russia. Water pressure for the dam is approximately 30 million tons, of which 60% is neutralized by the dam's own weight and 40% is carried to rock on the bank.

The dam supports the Sayano-Shushenskoe reservoir, with a total capacity of 31.34 km3, useful capacity of 15.34 km3 and surface area of 621 km2.

The dam is constructed to "safely" withstand earthquakes up to 8 on the Richter scale, and was recorded by the Guinness Book of World Records for the strongest construction of its type.

The Sayano-Shushenskaya hydroelectric power dam is seen from above Cheryomushky, Russia on August 20, 2009. (ALEXANDER NEMENOV/AFP/Getty Images)

The station is the largest one contributing to peak consumption in the Unified Energy Systems of Russia. More than 70% of generated electrical power goes to Rusal's four smelters in Siberia.

In years of heavy rainfall, about 1,600-2,000 GWh are lost due to lack of high-voltage line transmission capacity, and some water bypasses the turbines. To avert this, a new aluminium plant was started on 15 December 2006.

The decision to build the power station was taken in 1960. On 4 November 1961, geologists reached the area, and an exact location was chosen. Construction started in 1963 and the first turbine went online on December 18, 1978. Plant became fully operational in December 1985. It was partially reconstructed in 1987 and in 1991. The plant was designed by the Leningrad (now Saint Petersburg) branch of the Hydroproject institute, Lenhydroproject.

Following the collapse of the Soviet Union, the power plant was privatized in 1993, with RAO UES becoming the main shareholder. In April 2003, the Government of Khakassia by the initiative of the governor Alexei Lebed filed a suit to invalidate the deal. In April 2004, the East Siberian Arbitration invalidated the deal; however, it was overruled by the Supreme Arbitration Court.

The plant was closed after an accident on 17 August 2009. Some of the old turbines were subsequently restarted temporarily, but all are being sequentially replaced with updated more efficient equipment. As of Nov. 2014, all 10 generators are operational. 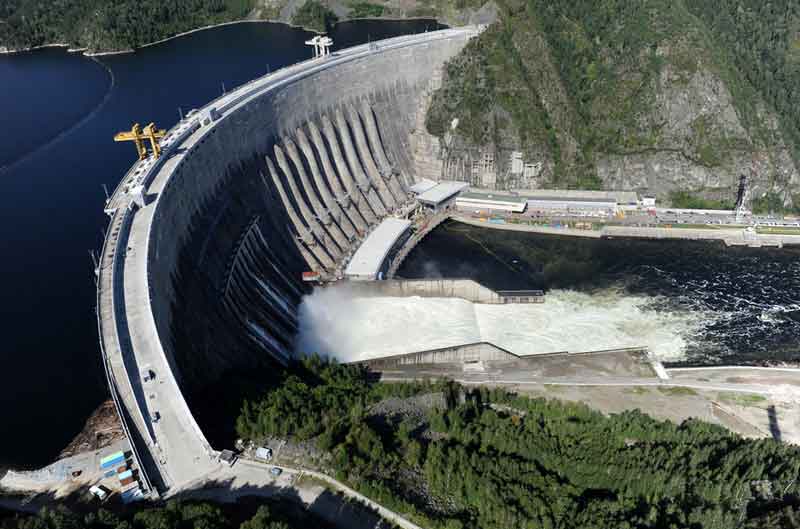 The Sayano-Shushenskaya hydroelectric power dam is seen from a helicopter in Cheryomushky on August 20, 2009. (ALEXANDER NEMENOV/AFP/Getty Images)

On 17 August 2009 at 8:13 AM, the hydro-electric plant suffered a catastrophic accident that caused flooding of the engine and turbine rooms, and two 711 MVA electric generators to explode underwater as a result of a short circuit. All other machinery was damaged to some extent, with only four hydro-aggregates ultimately recoverable; the remaining six required replacement. As of 10 September 2012, 75 people, including 1 pregnant woman, were confirmed dead, while one person was still listed as missing forty days after the disaster.

Power generation from the station ceased completely following the incident, with the resulting blackout in residential areas being alleviated by diverting power from other plants. Aluminium smelters in Sayanogorsk and Khakassia were completely cut off from the grid before power supplies were replaced using alternate power sources. Russia warned that in the longer term it might lose up to 500,000 tons of aluminum output due to the power shortage, and called for accelerating the construction of the Boguchanskaya hydroelectric power station to replace lost generating capacity.

The accident caused an oil spill with at least 40 tonnes of transformer oil released, spreading over 80 km downstream of Yenisei.

The plant restarted operations on 24 February 2010, while repairs were complete by November 2014. According to Russian Energy Minister Sergei Shmatko the rebuilding of the engine room alone would cost $1.2 billion.
Dam subcontractor Gidroelectroremont's chief accountant has been accused by the Khakassia police of embezzling 24 million rubles from the funds allocated by RusHydro for repairing the dam. 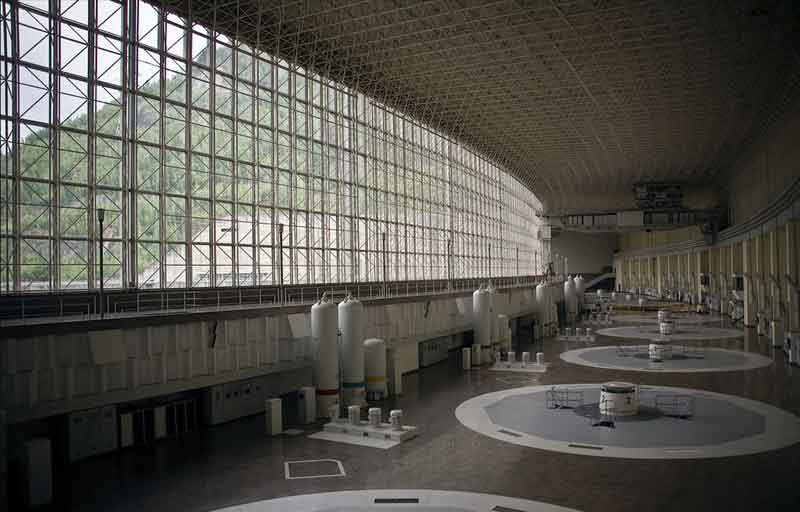 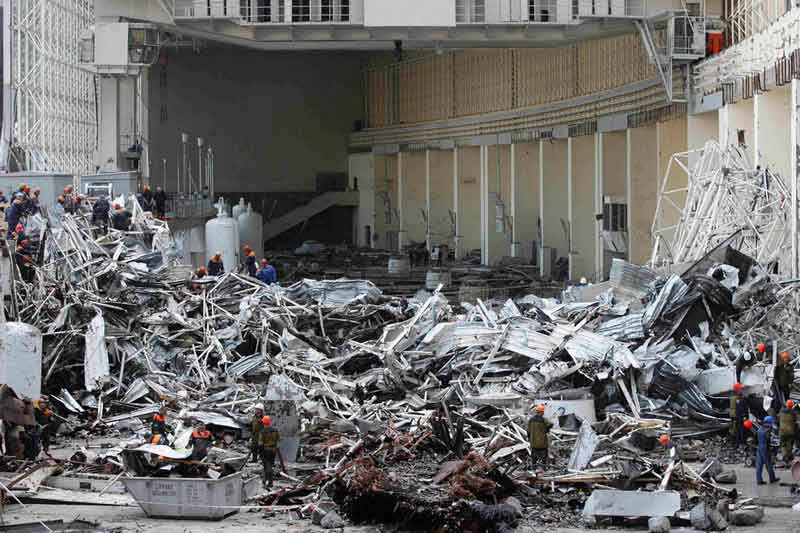 The same hall as the photo above, seen after the accident. Rescuers work in the debris of the Sayano-Shushenskaya hydroelectric power station near Siberian village of Cheryomushki, August 20, 2009. (REUTERS/Ilya Naymushin) 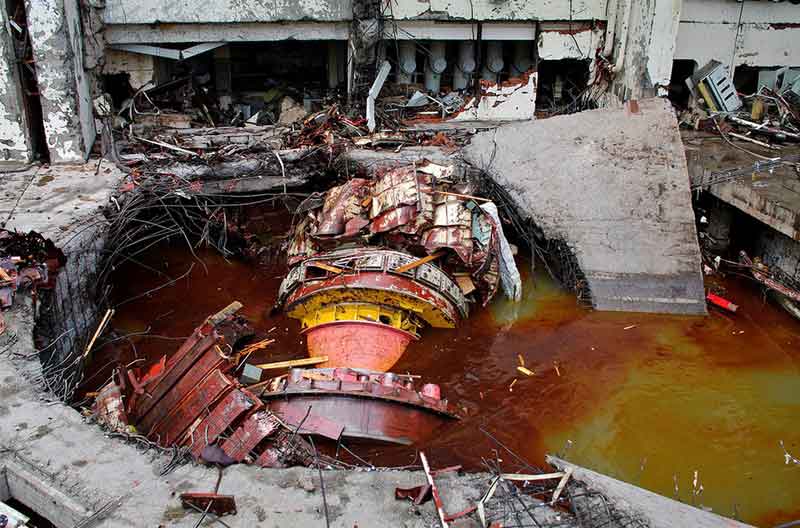 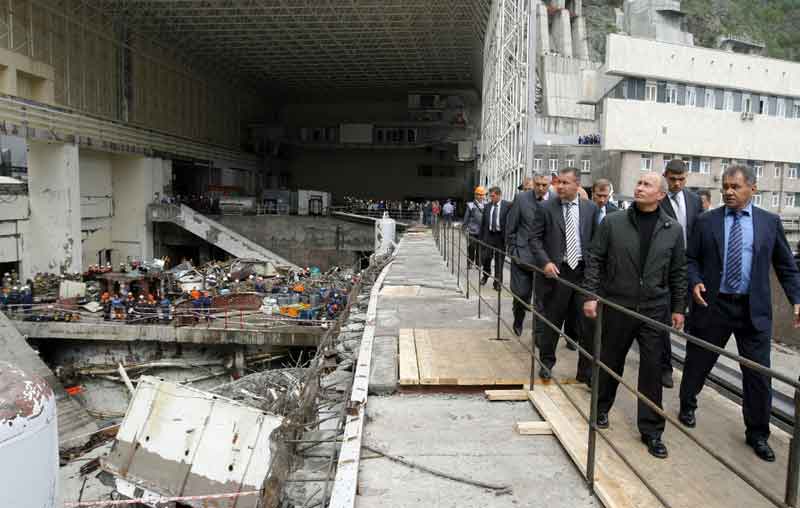 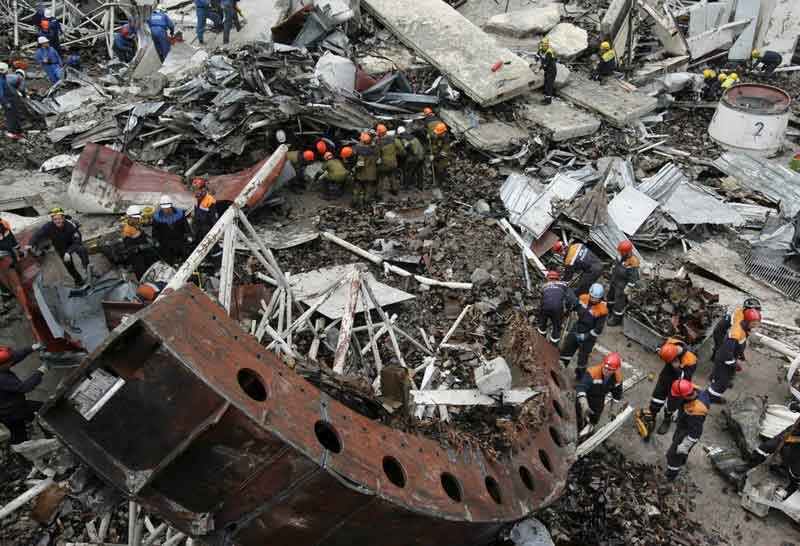