5 Km into the Persian Gulf, lie the Palm Islands, Dubai. Palm Jumeirah can even be seen from space. It is the biggest man made island in the world. Dubai is one of the richest places in the world, having size twice that of London. By 2016 oil is believed to be finished in Dubai, hence thrashing its economy to ground. Dubai must find a new source of income.

The Crown Prince Sheikh Muhammad bin Rasheed Al Maktoum devised a $2 billion plan to save his country. His vision was to turn Dubai into a #1 luxury and holiday resort. He has the history of getting done what he wants. Besides creating golf courses, world's tallest structures, he also has built the world's tallest hotel - The Burj Al Arab. His idea is mass tourism.

Why Palm Tree Islands were built..

Dubai is a perfect place for the idea, having sunny days throughout the year. It has numerous beaches with hotels and resorts and a number of shopping malls. 5 Million tourists visited Dubai each year, which the Sheikh wanted to triple to 15 million. But the problem was that the coastline of Dubai is just 72 Km, not enough for 15 million tourists that were to come. There is always a solution to a problem, build a massive island, shaped Palm Tree, up to the year 2006. The island was supposed to be 5.5 Km in diameter, thus increasing the coastline by 56 Km.

The extra ordinary plan was to build a city in that island. Shopping ,malls, restaurants, hotels, apartments and homes. The island was to host 22 luxurious hotels. Island could also be built from concrete, but to blend it with the surroundings, it was to be made from sand and gravels. 94 million cubic meters of sand was required for its construction. To protect from sea, breakwater was to be built of 5.5 million cubic meters of rock. Together they constitute to be able to build a 2.5 m high wall encircling the entire world.

World's best engineers were needed for the project. Search for experienced professional leaded to Dutch, who have increased Holland's land by 35%. they were booked and were to prove first of all that it was possible to build a megastructure island, out at the sea. Strength of storms in the sea was to be calculated and also the rise in water level due to global warming was taken into account. Strong tides were the dangerous thing. They destroy nearly everything in their path. But this area proved to be a lucky one. Research team worked out that Arabian gulf is only 160 Km wide and only 30 meters deep, hence too short and too shallow for catastrophic waves to built up. To keep this fragile island safe, breakwater was to be constructed having height up to 3 meters and 11.5 Km long. In August 2001 the construction of break water started.

Due to sept 11, 2001 attacks the tourism to middle-east stopped but the project kept on moving. 1200 foreign engineers were put to work. These engineers had previously experience of Hong Kong's International Airport, Singapore's Industrial center, Holland's North Road and other renowned megastructures. But no one had reclaimed a structure this size or shape before. By Nov, 2001 9 barges, 15 dumpers, 4 dredgers, 30 heavy land base machines and 10 cranes beside other construction machinery, were put to work.

It's challenge was to put sand into the sea bed. Dredgers would collect sand from the sea and dump it where break water was to be constructed. All this was done when sea was at its calmest. Finding the right sand was an enormous job in itself. Dubai has a lot of sand, as there are vast areas there. But desert sand was too fine and sand at sea was more coarser and resistant to waves. To keep that sand in place, bare loaded rubble was dropped on to it. This was to rise breakwater to a height of 4 m above sea level. This was beginning of the sea defense, without which island couldn't exist.

The sloping layers take out the force of the waves as they hit it. But sand and rubble is at the base. What really protects them both is another layer of rock. Each piece of rock weighed up to 6 tons. Sourcing huge amount of rocks forced builders to excavate rocks from 16 quarries across UAE. 11.5 Km breakwater needed 5.5 million cubic meters of rocks, enough to build two Egyptian Pyramids. Now, when breakwater had been built for half of its length, construction for the island began. Sand dredgers collected sand from the Persian Gulf and dumped it to form the extreme island. The 8000 tons dredgers filled only in one hour and dumped at 10m/s, enough to fill Olympic swimming pool in just 4 minutes.


How Palm Island was curved..

To insure that the island is in it s required place and shape, 676 Km up in the space a Private satellite was used. The shape of island is nearly curved everywhere and it required pin point accuracy to shape it as a palm tree, hence, GPS (Global Positioning System) was used while pouring sand into the sea.

Mobile receivers were used as a grid reference for the island and the satellite gave coordinates of the point where sand was to be put. The dredgers would then fill the area of sea which they were commanded by the satellite.

As the construction of the Megastructure island had started before the research was finished, now engineers realized that fresh water was not circulating properly inside the island branches of the palm shaped area. Tides were not flushing the system properly. Water was in danger of becoming stagnant. Engineers of the Palm Island in Dubai, came up with the solution that to cut the outer ring of island at two places, so that water enters and flushes the system.
By August 2003 breakwater construction for the fragile island was completed. After two month from that, the island was also completed in the given time span.

Now 4500 houses were to be built along with 22 hotels, shopping malls, resorts, and road network.Paradise Island Luxury Building at the new coast island.
This sand island was to support a full city but sand was not easy to built upon because sand was sprayed while pouring it in, so it was loose and Un-compacted.Liquefaction due to earthquake could also disappear the island into the sea. When earthquake occurs, it causes the sand particles to move closer due to vibration and compacts, thus pushing the water in between upwards, making the ground liquefy. It means if proper measure were not taken for the compaction of the island, it would sink back into the sea. So the construction team need to compact the sand layers themselves up to 12m depth. But it was not to be done by normal and usually used rollers. Vibro compaction phenomena was used. 15 machines were employed for this purpose. After 8 months time, the island was stabilized for 120, 000 people, who were to work there. Each day 850 buses would carry 40, 000 workers who were building a full city out in the sea.

These workers were to install gas pipes, water pipes, electric and telephone cables and build roads etc. they worked in 2, 12 hours shift in grueling temperatures i.e. at 40°C. 57 contractors were hired to construct houses, roads, hotels and shopping centers. The island was to house 60, 000 people at first but the people loved the idea so much that the capacity was doubled and all the houses sold out in just 3 days. So, the capacity was doubled and now the island homes accommodate about 0.12 million people. The beaches were to be checked regularly as sea water was eroding it continuously.

Impact of Palm Islands on ecology

At first the environmentalists were confirmed that the project would ruin the local marine life but when study was carried out, it showed that marine life was not disturbed and that the breakwater had turned into largest artificial reef for the marine life out there. Thus, the environmentalist had no objection to the project. Even before finishing this island, the Prince was inspired by the success and wanted to built two more islands, each bigger than the previous one.
Whole of the Project was completed in 2006. 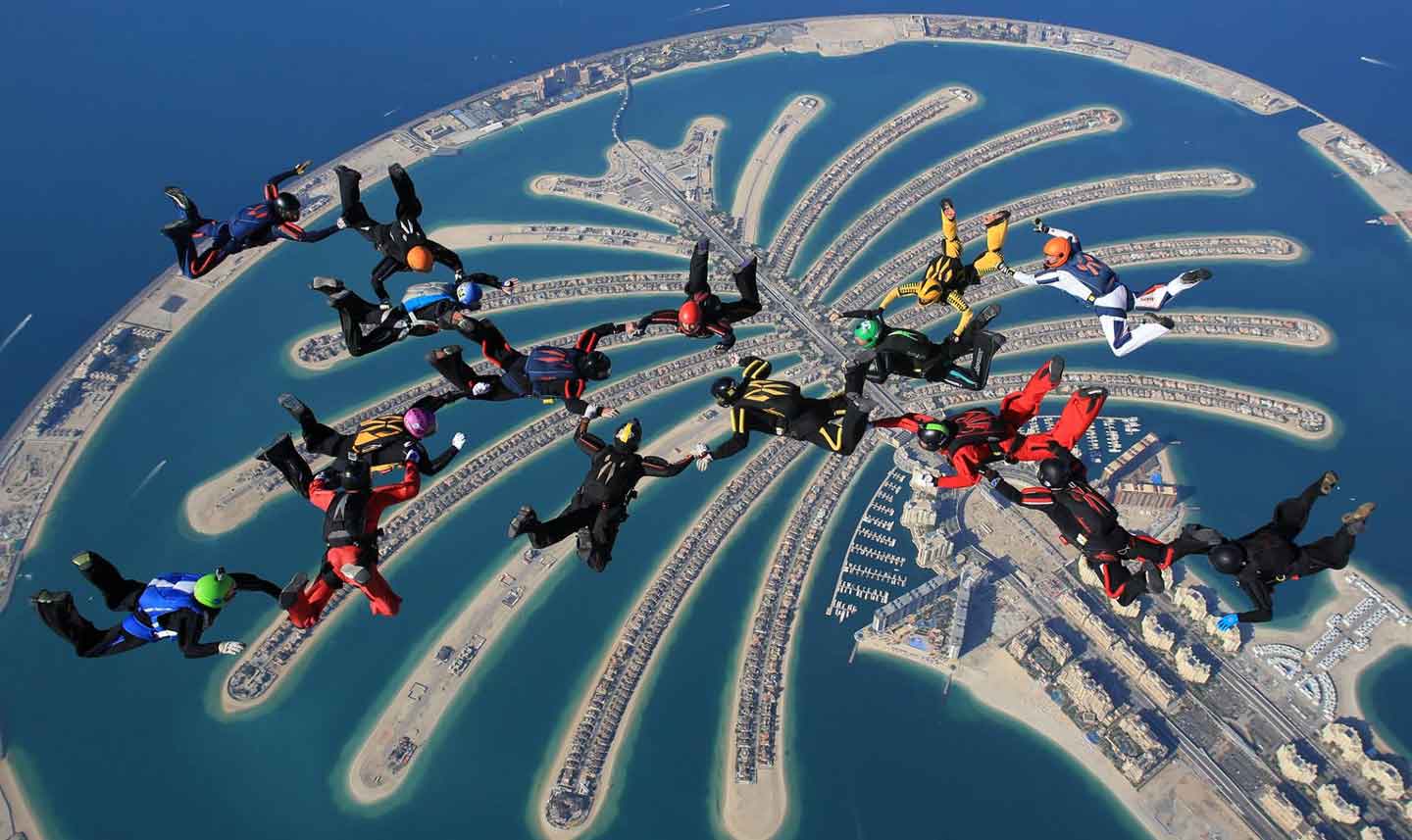