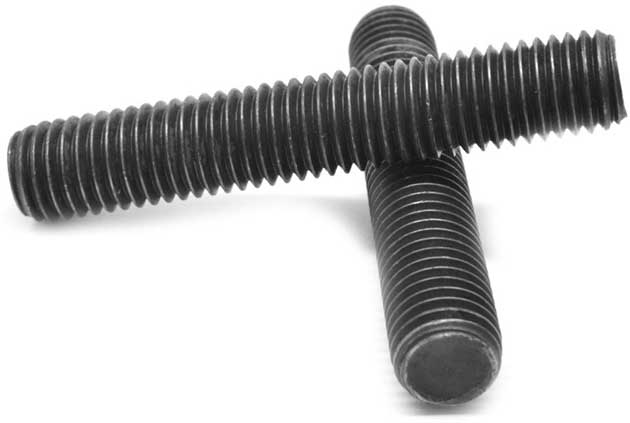 Hardness is probably the most important difference between A193 B7M & A193 B7. The maximum hardness of ASTM A193 B7M is 235 HB or 99 HRB, while the maximum hardness of A193 B7 is 321 HB or 35 HRC. The most notable difference from a manufacturing perspective is that when supplying A193 B7M bolts, each individual bolt or stud in the batch must be tested for hardness. A193 B7M fasteners also require a different type of heavy-duty hex nut than A193 B7, namely ASTM A194 Grade 2HM.

While A193 B7 is specified relatively often in the construction industry, A193 B7M is a specification not seen as regularly. This makes it important to understand the differences between the two specifications so that the right material is ultimately supplied.

ASTM A193 Grade B7 bolts and studs are manufactured from a chromium-molybdenum steel and are quenched and tempered (heat treated) to develop the desired mechanical properties (strength). Grade B7 is the most commonly used grade of A193 bolts in construction. B7 threaded bolts and short head bolts are available on the market. Grade B7 bolts are often used in pipe flange connections. These bolts are usually purchased and sold in bare metal, but are often hot-dipped galvanized, zinc-plated, Xylan-coated, PTFE-coated or otherwise coated for corrosion resistance. Note that coated bolts may not withstand the high temperatures to which uncoated B7 bolts may be exposed.

ASTM A193 Grade B7M bolts and studs are identical in chemical composition to Grade B7 (quenched and tempered medium carbon alloy steel), but have lower strength requirements and require 100% hardness testing of all fasteners manufactured in the batch. Grade B7M bolts are resistant to chloride, sulfide and hydrogen corrosion cracking (SCC) and are often used in the use of acid gases.