November 7, 2022 – It is versatile and abundant, and you can store and transport it. Ammonia is seen by many as a future source of clean energy for the maritime industry. But to make shipping on ammonia possible, much remains to be done.

The shipping sector accounts for about 3% of global CO2 emissions.

According to an IEA report, hydrogen-based fuels - including ammonia - would have to account for 30% of marine fuel to reach zero emissions by 2050.

There is no silver bullet for carbon-free marine fuels, but ammonia is easier to store than its green competitor hydrogen - it is also a safer way to transport hydrogen itself. 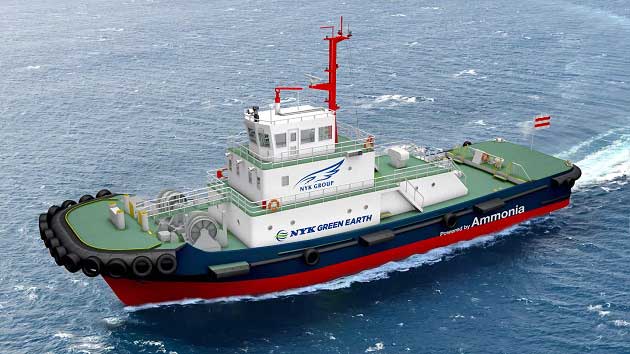 We have to eliminate greenhouse gas. Ammonia is the most advantageous solution.

'We need to reach net zero by 2050,' said Yokoyama Tsutomu, Senior General Manager at NYK Line's Green Business Group. 'We need to eliminate greenhouse gases. Ammonia is the most advantageous solution because, first of all, it does not emit greenhouse gases and we already have some experience in transporting ammonia.'

The design of ammonia faces major challenges because it is toxic to humans and aquatic organisms, but NYK is working to solve these problems.

'Safety is our most important and fundamental priority,' said Mr. Yokoyama. We are currently conducting a physical assessment in cooperation with the Japanese government agency, the Japanese Coast Guard. We are identifying the potential risk and also providing a solution.'

Made from hydrogen and nitrogen, ammonia is already widely used as a fertilizer and in detergents, but the production process is currently far from clean.


Cleaning up the ammonia production process

At the Fukushima Renewable Energy Institute, Japanese engineering firm JGC has teamed up with AIST to use electricity from renewable energy sources to make so-called 'green ammonia.

Cleaning up the ammonia production process can have significant benefits.

JGC plans to build a green chemical plant in the Fukushima region to make optimal use of locally produced renewable energy as part of its efforts to reduce the CO2 currently produced by ammonia and eventually go even further.

'The amount of CO2 is 1 to 2% of global emissions,' says Kai Mototaka, Group Manager at JGC Corp Sustainable Solutions. 'But ammonia can be used for another sector, a new market for energy, power generation and shipping, so we can reduce a huge amount of CO2, not just 1 to 2% but much more.'

'We expect maybe 10 to 20 percent of the whole CO2 emissions because it is used for the energy sector.'

And that is exactly what is in the pipeline in Hekinan.

In a world first, JERA, Japan's largest power producer, will conduct a pilot project at its coal-fired thermal power plant to use 20% ammonia, with the goal of running entirely on ammonia by 2050.

Once operational, the plant will produce about enough electricity to serve the neighboring town of Hekinan, a city of about 70,000 people.

The plant already uses ammonia, so the scientists were able to use existing technology and knowledge.

Crucially, however, a new supply chain is being created, using traditional ammonia combined with carbon capture, known as blue ammonia.

'We need to make a new supply chain outside Japan,' said Takahashi Kenji, general manager at JERA's Decarbonization Section. 'We are thinking about blue ammonia and we are also going to develop green ammonia, but green ammonia is still in the development stage and the volume is relatively small.'

Ammonia has significant potential, and while challenges remain - including cost - it is hoped that the price of renewable electricity will continue to fall, making green ammonia a viable clean fuel for the future.