For a revolution in renewable energy - again. Thirty years after Denmark built the first offshore wind farm, it is embarking on a new energy first: creating an artificial island that is expected to generate enough wind power for the country's entire grid plus other parts of Europe.


The Danish Energy Agency's DKK 210 billion facility, to be operational by 2033, is the largest construction project in the country's history. The North Sea Hub could also be a blueprint for other coastal states seeking alternatives to traditional, land-consuming renewable energy infrastructure.

This is a look at the ambitious goals and what it will take to achieve them..

Most of the funding for the $34 billion mega-project will come from the private sector, but the Danish state will be the hub's majority shareholder.

Excess Solution: The team will design the island to store excess electricity when supply exceeds demand.

Ability to run: Plans include an option for energy conversion plants that can convert electricity into another form of energy, such as hydrogen through electrolysis.

Denmark later unveils a climate action plan that calls for major investments in renewable energy and a 70 percent reduction in greenhouse gas emissions by 2030 compared to 1990.

February 2021: The Danish government introduces the Energy Island project and begins preliminary studies of the seabed around the island in May. 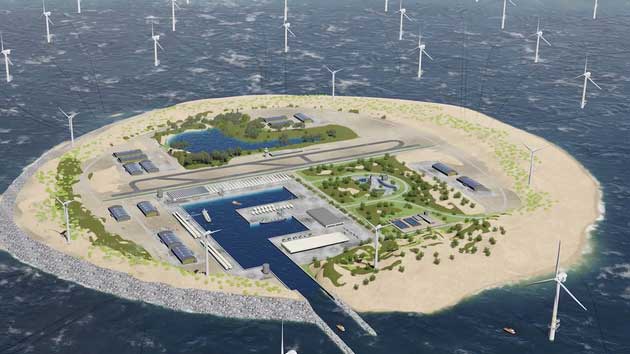 This decision marks the beginning of a new era of renewable energy production in Denmark and the world, linking very ambitious climate targets with growth and green jobs. It will contribute greatly to realizing the huge potential for European offshore wind energy, and I am excited about our future cooperation with other European countries.


2022: The project owners are expected to enter into public-private partnerships to build transmission cables that will send excess power from the island to other parts of Europe.

2024: Energinet , the Danish energy transmission network operator, is to complete studies on the impact of offshore wind turbines on the seabed and the environment.

2026: Activities of the Energy Island project are to begin.

Denmark is still deciding whether to build the entire island at once or to adopt a modular approach where teams can expand the island over time.

Much of the offshore construction will take place during the hottest months. To keep the project on schedule, some elements of the facility will be built onshore during the colder months.