A Flame Arrester also spelled arrestor is a device which allows gas to pass through it but stops a flame in order to prevent a larger fire or explosion. There is an enormous variety of situations in which flame arresters are applied. Anyone involved in selecting flame arresters needs to understand how these products work and their performance limitations. For that purpose, this article provides an introduction to the technology and terminology of flame arresters and the types of products available.

The operating principle of flame arresters was discovered in 1815 by Sir Humphry Davy, a famous chemist and professor at the Royal Institution in England. A safety committee of the English coal mining industry had approached Davy for technical assistance. They needed a way to prevent miners' oil lamps from causing explosions when flammable gas called firedamp seeped into the mine shafts. Sir Humphry studied the gas, which consisted mostly of methane. The investigation centered on how methane burns under various conditions and with various proportions of air. Davy's solution was to enclose the lamp flame securely with a tall cylinder of finely woven wire screen called metal gauze. Two of the earliest Davy safety lamps are shown on the right.
Enough lamplight passes out through the screen to be useful. Air for the oil flame around the lamp wick enters through the lower part of the screen. Hot exhaust gas escapes through the upper part. When a combustible mixture of methane flows in with the air, a methane flame burns against the inside of the screen. However, neither the methane flame nor the lamp flame passes through the narrow openings of the screen. The metal wire absorbs heat from the flame and then radiates it away at a much lower temperature. 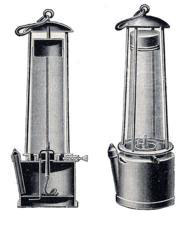 Since Sir Humphry's time, flame arresters of numerous varieties have been applied in many industries. All of them operate on the same principle.. removing heat from the flame as it attempts to travel through narrow passages with walls of metal or other heat-conductive material. For instance, flame arresters made by most manufacturers employ layers of metal ribbons with crimped corrugations.

Flame arresters are passive devices with no moving parts. They prevent the propagation of flame from the exposed side of the unit to the protected side by the use of wound crimped metal ribbon type flame cell element.
This construction produces a matrix of uniform openings that are carefully constructed to quench the flame by absorbing the heat of the flame. This provides an extinguishing barrier to the ignited vapour mixture. 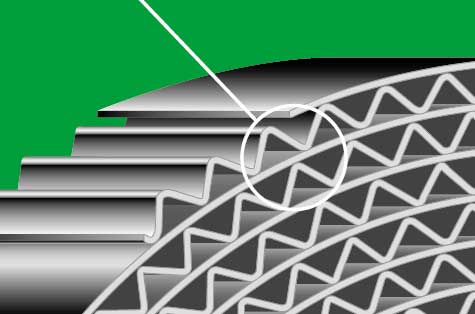 Most in-line flame arrester applications are in systems which collect gases emitted by liquids and solids. These systems, commonly used in many industries, may be called vapor control systems. The gases which are vented to atmosphere or controlled via vapor control systems are typically flammable. If the conditions are such that ignition occurs, a flame inside or outside of the system could result, with the potential to do catastrophic damage.

However, in-line flame arresters are sometimes used in end-of-line applications. For instance, an in-line unit may be mounted below a tank vent Valve on a liquid storage tank. The Valve reduces emissions and product loss, while the flame arrester protects the tank from flames in the atmosphere during venting of flammable gases.

Selecting in-line flame arresters
The various dynamic states explained earlier for confined flames can be very dangerous for a process system due to the tremendous energies associated with detonation pressure and flame velocity. Things happen fast and can turn catastrophic. These multiple dynamic states increase the challenge of providing a flame arrester product or products which stop the flame and withstand the enormous pressures caused by explosions within the confined piping.

The classic application is in preventing fire in the atmosphere from entering an enclosure. Around 1920, for instance, flame arresters began to be installed on vents on oilfield storage tanks. They keep the tanks from exploding when gas flowing from the vents is struck by lightning.

Conversely, some end-of-line flame arresters prevent fire in an enclosure from igniting an explosive atmosphere such as in a refinery. For instance, flame arresters may be installed in furnace air inlets and exhaust stacks. 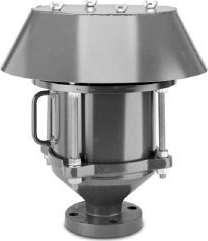 Selecting end-of-line flame arresters
End-of-line deflagration flame arresters are designed for unconfined flame propagation, also referred to as atmospheric explosion or unconfined deflagration. They simply bolt or screw onto the process or tank connection. These designs incorporate well-established but simple technology. Most use a single element of crimped wound metal ribbon that provides the Heat Transfer needed to quench the flame before it gets through the arrester element.


The main points of concern when selecting an arrester for end-of-line applications are as follows..

A flame arrester, the use of which in an open vent line or on the inlet to the Pressure/Vacuum Valve is an effective method to reduce the risk of flame transmission. The user is cautioned that the use of a flame arrester within the tank's relief path introduces the risk of tank damage from overpressure or vacuum due to plugging if the arrester is not maintained properly. More information on flame arresters can be found in ISO 16852, NFPA 69, TRbF 20, EN 12874, FM 6061, and USCG 33 CFR 154. The use of a flame arrester increases the pressure drop of the venting system. The manufacturer(s) should be consulted for assessing the magnitude of these effects.