Noise-induced hearing loss is an extremely important health problem for people who work in industry. This condition is often caused by repeated exposure to loud noises, especially those exceeding 85 decibels, which is common in manufacturing plants. To prevent the harmful effects of noisy machinery and loud production floors on workers, many manufacturing facilities are turning to industrial silencers to reduce this risk and help with acoustic attenuation.

The industrial silencers described below use a combination of scattering and absorption to attenuate sound in an industrial environment.

Reactive silencers are similar to those used for automobile exhaust systems, and are also called mufflers.

Like car mufflers, industrial silencers are designed with multiple chambers and perforated tubes. These perforations redirect and bounce sound waves back to the source of the sound, effectively reducing the volume of sound we hear. 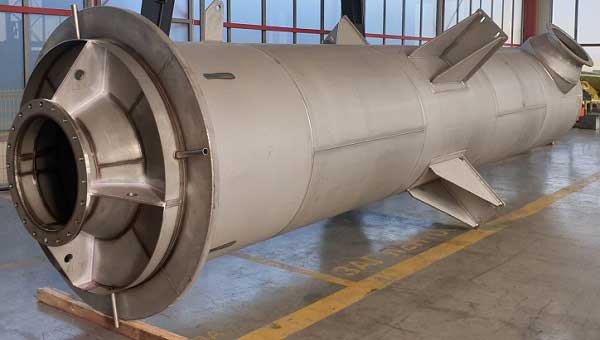 
These silencers contain no acoustic insulation and attenuate sound primarily by scattering and reflecting sound waves. A key advantage of reactive silencers is that they are relatively easy to clean because they contain no fibrous material, and pressure loss is negligible.

These silencers also tend to be quite small, making them suitable for engines and exhaust systems. Reactive silencers are typically used for fixed-speed machines, such as generators and blowers.

The absorptive silencer is the most common design. It specifies that sound energy is absorbed by many different types of fibrous gasket materials. As sound waves pass through the fibers of the absorbent material, the sound energy shrinks into small amounts of heat.

Absorbent silencers are very effective at high sound frequencies (500-8,000 Hz). At frequencies above and below this range, attenuation performance gradually decreases.

Note that when sound is absorbed by the gasket material, they do not rely on other internal mechanisms to attenuate the sound. Consequently, absorbent silencers cause minimal airflow.

Also known as gas silencers, steam vent silencers are designed to reduce the amount of noise caused by gas or steam.

Vent silencers work differently than absorbent and reactive silencers because they do not attempt to reflect sound waves and may or may not use absorbent materials. Instead, vent silencers dampen sound by dispersing the flow of pressurized gas or steam as it exits a pipeline.


Pressurized air can have a very high flow rate and velocity as it leaves a pipe. This causes unsafe noise levels and can potentially lead to hearing problems. Steam vent silencers reduce the increased gas and steam pressure caused by machinery, and eventually exhaust the flow into the atmosphere.