Here below, for example, you will find the
center to face distance of NPS 2 elbows
(the A distance on the image)

The function of a 45° elbow is the same as a 90° elbow, but the measurement of dimensions is different to that of the 90° elbow. 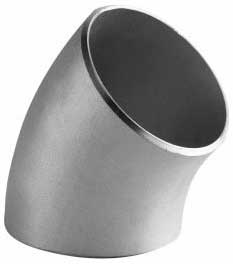 The radius of a 45° elbow is the same as the radius of the 90° LR (1.1/2D). However, the center to face dimension is not equivalent to the radius as in 90° LR elbows. This is measured from each face to the point of intersection of the center lines perpendicular to each other, distances B on the image. This is due to the smaller degree of bend. Short radius 45° elbows are not available.

The most applied version is the 90° long radius and the 45° elbow, while the 90° short radius elbow is applied if there is too little space. The function of a 180° elbow is to change direction of flow through 180°. Both, the LR and the SR types have a center to center dimension double the matching 90° elbows. These fittings will generally be used in furnesses or other heating or cooling units.
Dimensions, dimensional tolerances and more images, can be found in the main Menu Fittings.

In addition to the defined elbows, there is the Reducing Elbow, which is a elbow with various diameters on the ends. Because this elbow, for many suppliers it is not a standard item, and thus probably a high price with a long delivery time, the use of a normal elbow with a separate reducer is an option if the situation allows. 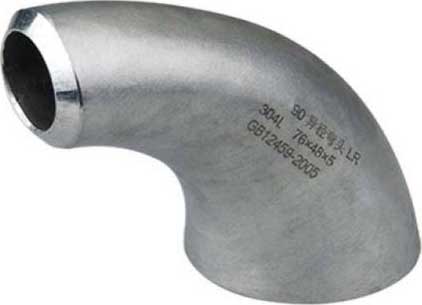 Other degrees elbows can be machined from a standard elbow. Longer radius type, the center to face dimension e.g. is three times the nominal size (3D), even is available.

Dimensions, dimensional tolerances etc. for long and short radius elbows are defined in ASME B16.9.

The weakest point on an elbow is the inside radius. ASME B16.9 only standardizes the center to face dimensions and some squareness dimensional tolerances. The wall thickness at the weld line location even is standardized, but not through the rest of an elbow. The standard states that the minimum tolerance will be within 12.5% of the minimum ordered wall thickness of the pipe. A maximum tolerance is specified only at the ends of the fitting.

Many providers of buttweld elbows (and tees) provide one schedule greater thickness so that sufficient wall thickness, after forming, remains.