What is Bolt Tensioning..

Tensioning is the direct axial stretching of the bolt to achieve preload. Inaccuracies created through friction are eliminated. Massive mechanical effort to create torque is replaced with simple hydraulic pressure. A uniform load can be applied by tensioning multiple studs simultaneously.

Tensioning requires longer bolts, and a seating area on the assembly around the nut. Tensioning can be done using detachable Bolt Tensioners or Hydraulic Nuts. 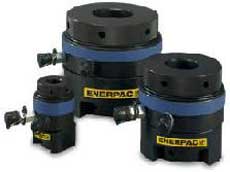 
What is Load Loss

Load loss is a loss of bolt elongation depending on factors such as thread deflections, radial expansion of the nut, and embedding of the nut into the contact area of the joint. Load loss is accounted for in calculation and is added to the preload value to determine the initial Applied Load. The preload depends on Applied Load and Load Loss (load loss factor).

Tensioning permits the simultaneous tightening of multiple bolts; the tools are connected in sequence via a high-pressure hose assembly to a single pump unit. This ensures each tool develops the exact same load and provides a uniform clamping force across the joint. This is especially important for pressure containing vessels requiring even gasket compression to affect a seal.

The bolt behaves like a spring, when the pressure is released the bolt is under tension and attempts to contract, creating the required clamping force across the joint.

Not all applications allow for the simultaneous fit of a tensioning device on each bolt, in these cases at least two tensioning pressures are applied. This is to account for a load loss in those bolts already tensioned as the next sets are tightened. The load losses are accounted for in calculation and a higher load is applied to allow the first sets to relax back to the target preload. 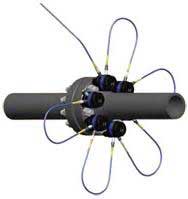 Set-up using a 50% tensioning procedure. Half the bolts are tensioned simultaneously, the tools are relocated on the remaining bolts and they are subsequently tensioned. 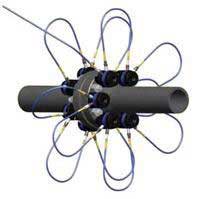 Set-up using a 100% tensioning procedure. All bolts are tensioned simultaneously.

In a flanged connection, all components must be correct to achieve a seal. The most common cause of leaky gasketed joints is improper installation procedures.

Before beginning a bolting process, the following preliminary steps will avoid future problems..

Irrespective which method of tightening is used, above determined checks and preparations always must be done.

My own experiences about...Torque Wrenches

Improper flange connections
the bolts are too short! 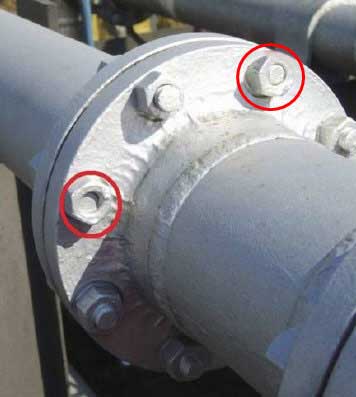 What can you do..


What is the proper length of a Stud Bolt..
As a rule, you can use.. The free threads of the bolt above the top of the nut is equals to 1/3 times the bolt diameter.