Corrosion is degradation of materials properties due to interactions with their environments, and corrosion of most metals (and many materials for that matter) is inevitable.
While primarily associated with metallic materials, all material types are susceptible to degradation. Degradation of polymeric insulating coatings on wiring has been a concern in aging aircraft. Even ceramics can undergo degradation by selective dissolution. Like death and taxes, corrosion is something we hope to avoid; but ultimately it is something we must learn to deal with.

The fundamental cause or driving force for all corrosion is the lowering of a system's Gibbs energy. The production of almost all metals (and engineering components made of metals) involves adding energy to the system. 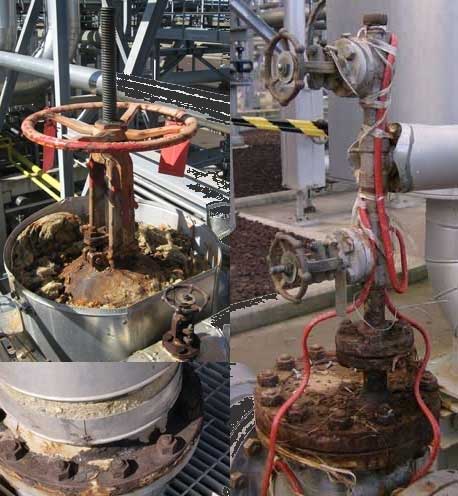 As a result of this uphill thermodynamic struggle, the metal has a strong driving force to return to its native, low energy oxide state. This return to the native oxide state is what we call corrosion and even though it is inevitable, substantial barriers (corrosion control methods) can be used to slow its progress toward the equilibrium state.

In light of the thermodynamic basis for corrosion it is not surprising that costs associated with corrosion are high. Several studies over the past 30 years have shown that the annual direct cost of corrosion to an industrial economy is approximately 3.1% of the country's Gross National Product (GNP). In the United States, this amounts to over $276 B per year.

The Department of Defense alone has corrosion costs of $20 B. Because of the signifi cant economic, safety, and historical impact of corrosion on society and because corrosion of metals is an electrochemical process, it is also not surprising that the Corrosion Division is one of the oldest divisions within ECS.

The Division was established in 1942, but corrosion has been an important topic in the Society since 1903. Reviews of the early literature and history of the Division were prepared by Uhlig for the 50th and 75th anniversaries of the Society, and a centennial review by Isaacs was published more recently. Readers looking for a good overall source of corrosion information are encouraged to consult Uhlig's Corrosion Handbook.

Most corrosion processes involve at least two electrochemical reactions (one anodic and one cathodic). A corroding surface can be thought of as a short-circuited battery; the dissolution reaction at the anode supplies electrons for the reduction reaction at the cathode. A short circuit is the electrical connection made by a conductor between the two physical sites, which are often separated by very small distances.

Thus, the study of corrosion processes involves the use of many of the same tools that electrochemists studying batteries, fuel cells, and physical and analytical electrochemistry use. The application of mixed potential theory to corrosion was originally presented by Wagner and Traud and discussed later in the Journal of The Electrochemical Society by Petrocelli.

In 1957, Stern and Geary theoretically analyzed the shape of polarization curves providing the basis for the primary experimental technique (electrochemical polarization) used in electrochemical studies of corrosion. The formation of surface oxide films is critical in mitigating the rate of metal dissolution, so corrosionists have much in common with those studying dielectrics for other purposes. It is these thin (< 10 nm) native oxide films that make the technological use of metallic materials possible by serving as barriers to dissolution.

Traditionally, corrosion is classified into eight categories based on the morphology of the attack, as well as the type of environment to which the material is exposed.
Uniform or general corrosion is the most prevalent type of corrosion and examples of this type of corrosion abound; including rusting of steel bridges, rusting of underground pipelines, tarnishing of silver, and patina formation on copper roofs and bronze statues. Anyone who has left a piece of unprotected steel outside is familiar with uniform corrosion.

Fortunately, uniform corrosion is predictable and can be controlled by various methods such as painting the surface or applying a layer of a sacrifi cial metal like zinc to steel. This sacrifi cial corrosion of the zinc surface layer to protect the underlying steel is actually a form of galvanic or bimetallic corrosion. In this case, like in a battery, we are using corrosion to our advantage.

The surfaces of some metals (like aluminum, stainless steel, and titanium) are protected from uniform corrosion by an extremely thin oxide film that forms naturally. Many practical applications of materials depend on the presence of this protective oxide. We would not be able to use planes (or just about any other structures for that matter) made from aluminum if it were not for this thin protective fi lm.

Unfortunately, this film can breakdown locally, resulting in forms of corrosion like pitting of aluminum plates, crevice corrosion of stainless steel fasteners, or stress corrosion cracking of pipes in nuclear reactors. Protection of structures and equipment from these forms of corrosion is both necessary and possible.

Approaches available for controlling corrosion include the application of protective coatings to metal surfaces to act as a barrier or perhaps provide sacrificial protection, the addition of chemical species to the environment to inhibit corrosion, alteration of an alloy chemistry to make it more resistant to corrosion, and the treatment of the surface of a metal to increase its resistance to corrosion.

Organic coatings are typically the first line of defense against corrosion and items such as automobiles and aircraft employ involved coating systems comprised of several layers and mechanisms of protection. These coatings are used to isolate the metal from the environment and their barrier properties are of specific interest.

You add an inhibitor to your automobile radiator whenever you add coolant. Likewise, you are inhibiting corrosion of steel when you spray WD-40 TM on a surface. Stainless steels are the classic examples of alloying to improve corrosion resistance.

In most environments, the ubiquitous rusting of steel is alleviated by the addition of at least 12% chromium. The chromium alters the composition of the naturally forming oxide film on the surface of the metal and at chromium concentrations greater than 12%, the film contains enough chromium oxide to significantly reduce corrosion. The protective films on other metals (like aluminum and magnesium) can also be improved through alloying additions.

Because corrosion usually originates at the surface of metal, many successful corrosion control methods involve treatment or alteration of the metal surface. These treatments can be as mundane as shot-peening the surface of a metal to improve its corrosion fatigue resistance; or they can be high-tech like laser-surface melting to provide a smooth, compositionally altered surface.

Future trends in corrosion research include the development of environmentally benign inhibitors, accurate prediction of structure service life, and finding ways to make corrosion a good thing! Huge sums of money are spent on inhibitors in a wide variety of industries. A single pipeline may spend a million dollars a year on inhibitors that are added to the oil before transport.

While chromate is a powerful inhibitor of corrosion on many metallic surfaces, it is carcinogenic. Thus, the search has been to find an inhibitor that is as effective as chromate, but environmentally benign. This requires interdisciplinary work involving chemistry, electrochemistry, surface science, and metallurgy.

As the infrastructure of industrialized countries continues to age, more and more failures due to corrosion are occurring. Replacing all the bridges and pipelines (gas, oil, water) would be prohibitively expensive, and unnecessary as most are in good condition and can provide many more years of service.

Figuring out which ones are failing and how long they can last is the function of service life prediction. This area involves work with computer scientists, engineers of all kinds (civil, mechanical, chemical, electrical, information), as well as economists. Accurate models require accurate representations of processes over ten orders of magnitude in size (< 0.1 nm to 10 m) and over twenty orders of magnitude in time (1 ps to 50 years or more). A compelling example of a grand challenge in this area is the prediction of corrosion behavior of the canisters selected to hold high-level radioactive waste for 10,000 years or more.

Corrosion can be a good thing. One can use dissolution to selectively remove one component from a material (known as dealloying), leaving a porous structure which can be used to hold and slowly elute drugs when the structure is implanted. Incorporation of such a material on the surface of a coronary sten may allow replacement of the currently used polymer films that can crack on expansion of the stent. In a similar vein (pardon the pun), magnesium stents are finding applications as bioabsorbable stents. Much has been learned with regard to corrosion in the past hundred years.

This research has provided insight into the nature of corrosion - what causes it to occur and how it can be prevented. The capabilities for extending the lifetime of a plethora of structures and components, ranging from cars and trucks to nuclear waste containment vessels, are now available.

Prior to the 1980s, vehicle corrosion was an issue most people in the U.S. had personal experience with (as graduate students - the authors of this article did).

Source for the text above by Barbara A. Shaw and Robert G. Kelly

A guide to corrosion protection