Fireproofing, a passive fire protection measure, refers to the act of making materials or structures more resistant to fire, or to those materials themselves, or the act of applying such materials. Applying a certification listed fireproofing system to certain structures allows these to have a fire-resistance rating.

The term fireproof does not necessarily mean that an item cannot ever burn.. It relates to measured performance under specific conditions of testing and evaluation. Fireproofing does not allow treated items to be entirely unaffected by any fire, as conventional materials are not immune to the effects of fire at a sufficient intensity and/or duration.

Fireproofing is employed in refineries and petrochemical plants to minimize the escalation of a fire that would occur with the failure of structural supports and the overheating of pressure vessels. The damage that fire could potentially do very early on, could add significant fuel to the fire.

The purpose of fireproofing therefore, is to buy time. The traditional method of fireproofing has been poured-in-place concrete or gunite. Other fireproofing materials, such as lightweight cements, prefabricated cementitious board, and intumescent coatings are used to a lesser extent, primarily in areas deemed less critical and where weight reduction is a significant benefit.

Why Fireproofing is used..

Typically, fireproofing is designed to protect the structural steel which supports high risk or valuableequipment. The failure point is generally considered to be 1000°F, as this is the point where steel has lostapproximately 50% of its structural strength. The aim then, is to prevent structural steel from reaching 1000°F forsome period of time. Tanks, pressure vessels, and heat exchangers may experience a significant cooling effect fromliquid contents and so, less fireproofing protection is generally required. Some thermal insulation systems mayserve a dual role as fireproofing and this is common with some pressure vessels. Piping may be insulated but it isnot generally considered to be fireproofed.

Fireproofing needs to be durable to survive the rigors of every day life in the plant so that if and when a fire does occur, the fire endurance properties have been maintained and the fireproofing can be depended on to function satisfactorily. Everyday exposure may involve mechanical abuse, exposure to oil, solvents, and chemicals, and outdoor weathering for prolonged periods of twenty, thirty, forty years or more. As a coating for steel, fireproofing may provide a good measure of corrosion protection. When applied directly to steel, concrete may passivate the steel surface by providing an elevated pH. Experience has shown, however, that passivation is less than certain, especially in coastal marine environments. Corrosion under concrete fireproofing can be significant. Intumescent coatings promise better corrosion protection than concrete by virtue of their low permeability but cases of severe corrosion under fireproofing (CUF) have been reported with these materials.

Intumescent epoxies are complex proprietary materials. Concrete and some of the other materials that are used for fire protection are more familiar. The materials themselves may seem simple, but the important details of system design are often overlooked.

Fireproofing is a misnomer because no material is completely fireproof. All construction materials are subject to fire damage. What we really mean is fire resistant - we seek to resist potential fire situations for a given period of time. Fireproofing is passive, built-in protection that buys time to fight the fire, shut off the fire's fuel supply and shut down the process. The aim is to minimize the overall damage incurred.

The decision to fireproof is driven by risk-based analysis. One needs to first consider the nature of the fire threat and then make an assessment of the required period of fire endurance for a wide variety of equipment including structural steel, pressure vessels, heat exchangers, pipe supports, LPG spheres and bullets, valves, and cable trays. The location of specific equipment within a process unit is important, as is a unit's location with regard to neighboring facilities.

No fire test method is going to be typical of a real fire situation and so, there is no single correct or "best" fire test method. Standardized testing simply provides a frame of reference for relative comparisons of fireproofing materials and designs.

In the 70s, ASTM E119 "Fire Test of Building Construction Materials" was the only internationally accepted standard for investigating the performance of fireproofing materials. This test method, however, was designed to measure the fire performance of walls, columns, floors, and other building members in solid fuel fire exposures. It does not simulate the high intensity of liquid hydrocarbon-fueled fires.

Where fireproofing is required, the level of fireproofing varies with the application in the plant. Typical protection requirements for a refinery or petrochemical plant might be as follows..

Concrete
The excellent fire protection afforded by concrete has been demonstrated time and time again over 90 years of experience in the petrochemical industry. The high mass and low thermal conductivity of concrete make it very effective at reducing heat input to the underlying structure. Poured-in-place concrete, using forms, is common for columns and beams. Gunite is pneumatically applied to spheres and other structures where the use of forms for poured-in-place concrete is impractical. The principal drawback with gunite application is that it can be very messy.

Post-fire inspections have shown that concrete spalls to various degrees but the general conclusion is that concrete/gunite performs satisfactorily with the steel structures well protected. Wire reinforcement is commonly used. Reinforcement does not prevent cracking and spalling of the concrete but it does minimize the loss of fractured material during a fire exposure.


Excellent Fire Endurance of 30 Year Old Concrete
A refinery fire initiated at a gas oil line from a crude distillation unit and burned for about 12 hours. The main pipe rack near the crude tower at the center of the fire was damaged beyond repair. The support structure for the crude tower overhead equipment was severely damaged.

The aluminum jacketed thermal insulation on vessels and exchangers was destroyed (aluminum melts at about 660°C) but most pressure vessels and heat exchangers, showed no visible signs of permanent damage, primarily due to the cooling effect of liquid contents. Gaskets that had been damaged and high strength bolts that had been tempered by the fire exposure, had to be replaced. 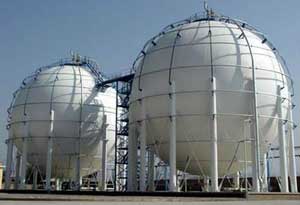 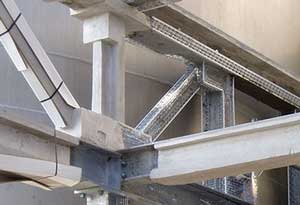 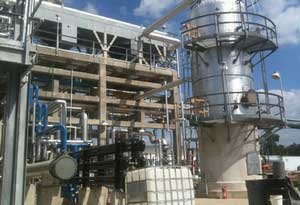 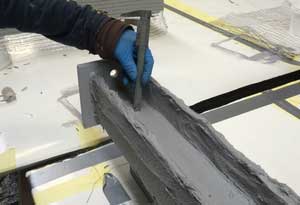 
Thermal expansion and contraction on structural support columns near ground zero caused a good deal of cracking and delamination of the concrete fireproofing; however, no evidence of deep damage to the concrete was found. The main concern was for the support structure of the crude distillation tower as the refinery is located in a seismic zone.

The radiant heat and direct fire exposure caused spalling of the 30 year old concrete cover on the exterior of the vessel skirt. Firewater cooling added to the spalling problem. Some rebar was exposed at the crude tower foundation, most notably on the side of the tower that faced the fire. Concrete was removed for inspection of the crude tower skirt and anchor bolts. No heat buckling of the skirt or distortion of the bolt seatings was observed. Bolts were checked for cracks and hardness measurements were made to confirm strength. The concrete fireproofing had prevented any permanent damage to the vessel skirt and anchor bolts. The 30 year old concrete was now a mess but it had served its function.

Concrete, by itself, cannot withstand hydrocarbon fires. In the Euro tunnel that connects United Kingdom and France, an intense fire broke out and reduced the concrete lining in the undersea tunnel down to a minimum. In ordinary building fires, concrete typically achieves excellent fire-resistance ratings, unless it is too wet, which can cause it to crack and explode. For unprotected concrete, the sudden endothermic reaction of the hydrates and unbound humidity inside the concrete causes such pressure as to spall off the concrete, which then winds up in small pieces on the floor of the tunnel.

This is the reason why laboratories insert humidity probes into all concrete slabs that undergo fire testing even in accordance with the less severe building elements curve (DIN4102, ASTM E119, BS476, or ULC-S101). The need for fireproofing was demonstrated, among other fire protection measures, in the European "Eureka" Fire Tunnel Research Project, which resulted in building codes for the trade to avoid the effects of such fires upon traffic tunnels. Cementitious spray fireproofing must be certification listed and applied in the field as per that listing, using a hydrocarbon fire test curve such as the one that is also used in UL1709.

Among the conventional materials, purpose-designed spray fireproofing plasters have become abundantly available the world over. The inorganic methods include..

The industry considers gypsum-based plasters to be cementitious, even though these contain no Portland, or calcium aluminate cements. Cementitious plasters that contain Portland cement have been traditionally lightened by the use of inorganic lightweight aggregates, such as vermiculite and perlite.

Gypsum plasters have been lightened by using chemical additives to create bubbles that displace solids, thus reducing the bulk density. Also, lightweight polystyrene beads have been mixed into the plasters at the factory in an effort to reduce the density, which generally results in a more effective insulation at a lower cost.

Fibrous plasters, containing either mineral wool, or ceramic fibres tend to simply entrain more air, thus displacing the heavy fibres. On-site cost reduction efforts, at times purposely contravening the requirements of the certification listing, can further enhance such displacement of solids. This has resulted in architects specifying the use of on-site testing of proper densities to ensure the products installed meet the certification listings employed for each installed configuration, because excessively light inorganic fireproofing does not provide adequate protection and are thus in violation of the listings.

Proprietary boards and sheets, made of gypsum, calcium silicate, vermiculite, perlite, mechanically bonded composite boards made of punched sheet-metal and cellulose reinforced concrete have all been used to clad items for increased fire-resistance.

An alternative method to keep building steel below its softening temperature is to use liquid convection cooling in hollow structural members. This method was patented in the 19th century although the first prominent example was 89 years later.