What is Water Hammer?

Water hammer usually occurs after the pump has been switched off, but can also be caused by the rapid opening or closing of a valve. This causes shock waves, also called pressure surges or water hammers, to move back and forth in the piping system at the specific speed of sound of the fluid in question.

For water at 21°C, the speed is 1460 m/s. The waves travel backward against the original direction of flow until they encounter a solid resistance, such as a check valve. There, the pressure surge is reflected. It runs back and forth until the pressure wave has dissipated.

The most difficult-to-handle, yet costly, water hammer conditions occur when pumps stop abruptly. In the event of a power failure, for example, all pumps within a system are stopped simultaneously; the entire mass is abruptly slowed. If pumps are shut down at full speed, this causes a pressure surge every time they are switched. This also damages the pump itself. It needs to be serviced more frequently and its service life is reduced.


How can the strength of the pressure surges be calculated?

With the help of the Joukowsky equation, the strength of the pressure surges can be calculated relatively precisely. The prerequisite is that the following is known..

When the column of fluid is decelerated or accelerated, the energy of the system is transformed from velocity energy to pressure energy. Since the fluid and the piping material are slightly compressible or flexible, they can absorb a fraction of the energy. The time until the pressure surge subsides thus depends, among other things, on the material and thickness of the pipes. 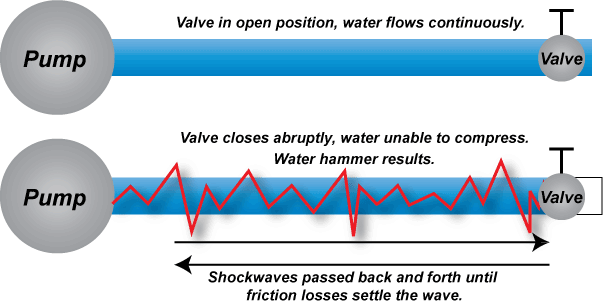 
What happens to the material during sudden pressure surges?

Cast iron, for example, is a rather brittle material. It is particularly susceptible to failure during sudden pressure surges that significantly exceed normal internal pressure. Other, more ductile materials absorb the pressure surges without breaking, but can be permanently deformed. Valves, sprinkler heads and pipe joints are also at risk of damage. Water hammer can also adversely affect pipe supports and pump foundations.

How to prevent water hammer?

If you want to avoid water hammer, you should start at the planning stage. In addition to basic knowledge of fluid properties, it is important that the designer has expertise in designing systems to avoid water hammer. Information on the operation of the piping system, valves, pumps and pumping stations is also essential. For example, to prevent sudden pressure changes near the valve's closing member, vents and vacuum relief valves are installed on the downstream side of the valve to allow air to enter the system and prevent a vacuum. Likewise, proper opening and closing of valves is critical to safe operation of the piping system.

The following steps can be taken to mitigate or eliminate water hammer..