Fracking is a technique for increasing the permeability of rock so that oil, natural gas or geothermal energy can be extracted more easily. Via a borehole, fluid is pumped under high pressure into the rock at a depth of 2 to 4 km, causing small cracks to appear. These cracks are several dozen meters long with a diameter of a few millimeters.


How does fracking work?

The fracking fluid consists of salt water (90%), small ceramic grains (8%) and chemicals (2%). The chemicals are needed to thicken the fluid into a gel, which makes it easier for the ceramic granules to get into the cracks that form. They also prevent corrosion in the pipes. After fracking, one to two thirds of this fluid is recovered. The recovered fluid is disposed of and processed as chemical waste water. The rest remains in the deep subsurface. The industry also calls fracking hydraulic well stimulation. 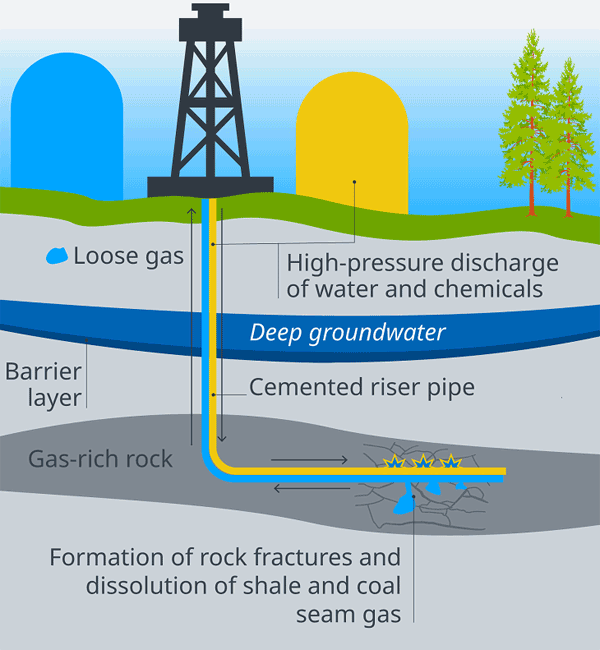 Fracking in the Netherlands

SUPERVISION OF FRACKING
The State Supervision of Mines (Staatstoezicht op de Mijnen (SodM)) supervises the use of fracking by mining companies. If a company wants to go fracking, it must submit a work programme, a health and safety document and an environmental report. SodM then assesses whether the fracking is being conducted safely and what chemicals the company is using. SodM can also monitor fracking during announced and unannounced inspections. If SodM does not consider fracking to be safe, the mining company will not be given permission to use this technique.

What are SodM's main areas of focus?

SEISMIC RISKS
Fracking has an impact on the subsurface. It can contribute to the occurrence of earthquakes if it is done in the vicinity of earthquakes. SodM assesses whether fracking is carried out at a sufficient distance from them and whether the pre-approved work plan is adhered to. The company must also state the seismic risks in the risk management plan provided and indicate the control measures. To date there is no indication that fracking in the Netherlands has caused seismicity.

INTEGRITY OF THE CAPROCK
It is important that no cracks appear in the earth layer above during fracking. The strength of the overlying rock is tested by the mining company and monitored by SodM.

GEOCHEMICAL INTERACTION
The chemicals used must not have an adverse effect on the underground rocks. Uncontrolled dissolution of rock salt and limestone in water and acids can compromise the integrity of the sealing layer. Therefore, SodM ensures that the company has the substances used tested in a laboratory for reaction with the specific rock.

WELL INTEGRITY
Ensuring that the well maintains its integrity and preventing fluid from leaking from the well into the subsurface or onto the surface is a legal obligation for the company. Prior to fracking, the company determines through modeling calculations whether the well can withstand the increased pressure during fracking. These calculations are reviewed by SodM.

EXPOSURE OF HAZARDOUS SUBSTANCES
The use of chemicals during fracking is subject to European laws and regulations. These include REACH - a system for registration, evaluation and authorisation of chemicals produced in or imported into the European Union.

Why is fracking controversial?

There are two ways to frack: conventional and unconventional. Unconventional fracking is controversial and is used in the extraction of shale gas. It has led to earthquakes in the United States and Great Britain, among other places. A major difference from conventional fracking is that not a single but dozens of frackings are made in a single borehole. Also, unconventional fracking uses considerably more fluid and therefore more chemicals to be able to increase the very low permeability of the shale rock. The other difference is the type of rock (porous reservoir rock or impermeable shale) and the depth. Shale gas is extracted from depths above 1500m. Most porous gas reservoirs are at depths of about 3km. Shale gas extraction is not allowed in the Netherlands.

Conventional fracking in the Netherlands