Pressure gauges are relatively inexpensive mechanical devices that, for the most part, are read manually.
One of the most well-known types is called the Bourdon gauge, which was patented in France by Eugene Bourdon in 1849.

Bourdon gauges contain a thin-walled metal tube that is typically threaded into the compartment where pressure is being measured. As pressure increases in the tube, the tube begins to straighten. On the other end of the tube is a lever system that contains a pointer. As the tube straightens, the pointer moves around a dial, indicating pressure in pounds per square inch (PSI). Common tube shapes include curved or C-shaped, spiral and helical. This is a mechanical device that is manually read. Another type of mechanical gauge that operates in a similar fashion and also contains a pointer is called a diaphragm gauge. 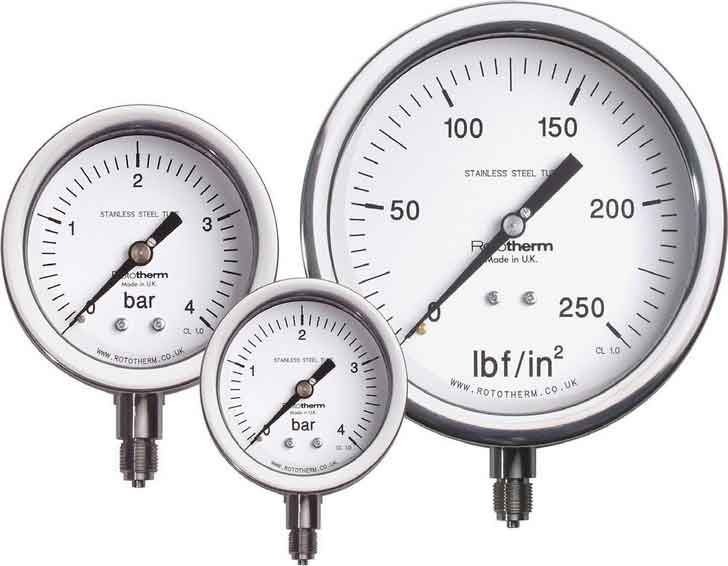 A liquid-filled pressure gauge improves the dry pressure gauge by introducing a liquid.. the most common fill fluids used are Glycerin and Silicone. Glycerin is used in around 95% of all liquid filling applications and is typically the 'standard.' The reason these fluids are used is because they're more viscous and their thickness helps keep the needle steady. Some gauges come dry but can be filled simply by filling the hermetically sealed gauge case through the fill port (usually at the top) and then reinserting the fill plug when finished. 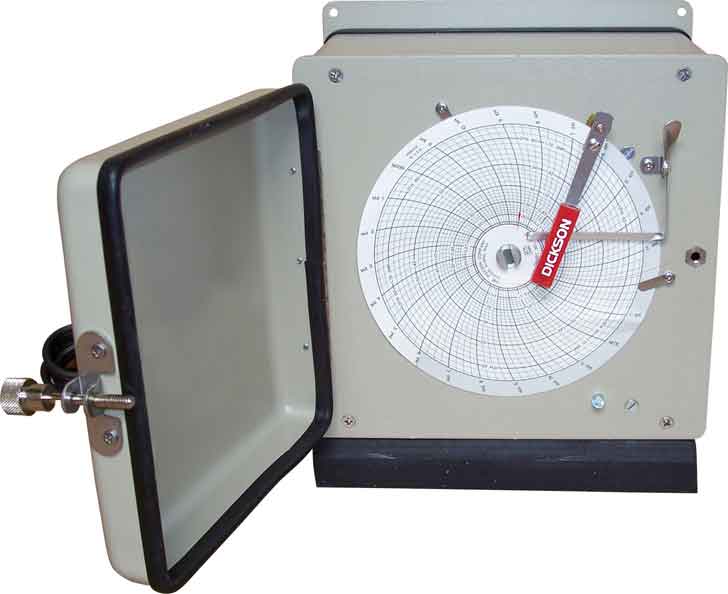 The static pressure system consists of a helical bourdon tube connected to a piping system, and measure the static pressure.
The thermal system consists of a spiral bourdon tube, a capillary, and a bulb. Usually all parts made of stainless steel.
The recording mechanism often is a pen system that continuously records data. It converts the mechanical input of the pressure and temperature into lines on a rotating chart.

A Hydrostatic Test Pump is a self-contained, portable, low volume, high pressure pump powered by hand, air, electric, or gas engines, and with a high pressure hose connected to the equipment. The pump is used to check the component to be tested, is being filled up with an incompressible liquid, usually water.
With the help of the pump incorporating appropriate safety relief and controls, the pressure of the test component is slowly increased to a predetermined set point and held for a predetermined time. Visual inspection is subsequently performed to determine whether any leakage exists or the pressure reduces from set pressure point.

This hydrostatic pressure test equipment is compact, efficient and cost effective, available in different combinations of pressure and flow (pressures to 1000 bar (14,500 psi) are possible). Though theoretically water is considered as non compressible fluid, it requires considerable amount of feeding to raise the pressure.