Ultrasonic nondestructive testing, also known as ultrasonic NDT or simply UT, is a method of characterizing the thickness or internal structure of a test piece through the use of high frequency sound waves. The frequencies, or pitch, used for ultrasonic testing are many times higher than the limit of human hearing, most commonly in the range from 500 KHz to 20 MHz.

What sort of materials can be tested..

In industrial applications, ultrasonic testing is widely used on metals, plastics, composites, and ceramics. The only common engineering materials that are not suitable for ultrasonic testing with conventional equipment are wood and paper products. Ultrasonic technology is also widely used in the biomedical field for diagnostic imaging and medical research.

Principle of ultrasonic testing.
LEFT..A probe sends a sound wave into a test material. There are two indications, one from the initial pulse of the probe, and the second due to the back wall echo.
RIGHT..A defect creates a third indication and simultaneously reduces the amplitude of the back wall indication.

How does it work..

High frequency sound waves are very directional, and they will travel through a medium (like a piece of steel or plastic) until they encounter a boundary with another medium (like air), at which point they reflect back to their source. By analyzing these reflections it is possible to measure the thickness of a test piece, or find evidence of cracks or other hidden internal flaws.

In ultrasonic testing, an ultrasound transducer connected to a diagnostic machine is passed over the object being inspected. The transducer is typically separated from the test object by a couplant (such as oil) or by water, as in immersion testing.

There are two methods of receiving the ultrasound waveform, reflection and attenuation.

In reflection (or pulse-echo) mode, the transducer performs both the sending and the receiving of the pulsed waves as the "sound" is reflected back to the device. Reflected ultrasound comes from an interface, such as the back wall of the object or from an imperfection within the object. The diagnostic machine displays these results in the form of a signal with an amplitude representing the intensity of the reflection and the distance, representing the arrival time of the reflection.

In attenuation (or through-transmission) mode, a transmitter sends ultrasound through one surface, and a separate receiver detects the amount that has reached it on another surface after traveling through the medium. Imperfections or other conditions in the space between the transmitter and receiver reduce the amount of sound transmitted, thus revealing their presence. Using the couplant increases the efficiency of the process by reducing the losses in the ultrasonic wave energy due to separation between the surfaces. 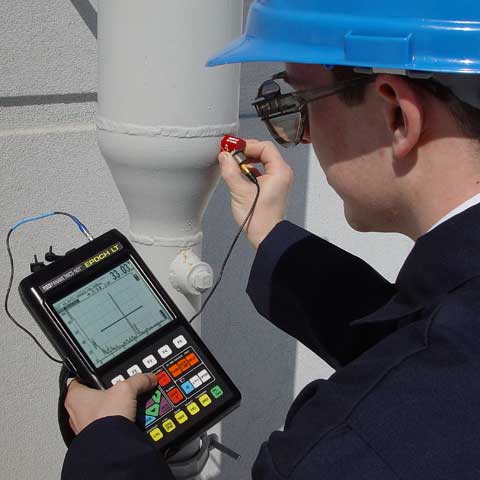 
What are the advantages of ultrasonic testing..

Ultrasonic testing is completely nondestructive. The test piece does not have to be cut, sectioned, or exposed to damaging chemicals. Access to only one side is required, unlike measurement with mechanical thickness tools like calipers and micrometers. There are no potential health hazards associated with ultrasonic testing, unlike radiography. When a test has been properly set up, results are highly repeatable and reliable.

What are the potential limitations of ultrasonic testing..

Ultrasonic flaw detection requires a trained operator who can set up a test with the aid of appropriate reference standards and properly interpret the results. Inspection of some complex geometries may be challenging. Ultrasonic thickness gages must be calibrated with respect to the material being measured, and applications requiring a wide range of thickness measurement or measurement of acoustically diverse materials may require multiple setups. Ultrasonic thickness gages are more expensive than mechanical measurement devices.

At a construction site, a technician tests a pipeline weld for defects using an ultrasonic phased array instrument. The scanner, which consists of a frame with magnetic wheels, holds the probe in contact with the pipe by a spring. The wet area is the ultrasonic couplant that allows the sound to pass into the pipe wall.

One of the most useful characteristics of ultrasonic testing is its ability to determine the exact position of a discontinuity in a weld. This testing method requires a high level of operator training and competence and is dependant on the establishment and application of suitable testing procedures. This testing method can be used on ferrous and nonferrous materials, is often suited for testing thicker sections accessible from one side only, and can often detect finer lines or plainer defects which may not be as readily detected by radiographic testing.