A Crane means a powered device

The invention of cranes made things easy for humankind because without them, loading, unloading, and lifting had to be done by human hands, would consume more time, and the entire system was not efficient at all. The ancient Greeks invented the first construction crane hundreds of years ago. Modern day construction cranes are huge, taking up tons of material hundreds of meters in height. For high end infrastructure projects, tower cranes are used that have a reach as high as 1000 meters.

Mobile cranes are characterized by the fact that they are designed to move, or travel, about the jobsite relatively easily. They are mounted on either wheels or crawlers and usually do not require a special permanent foundation from which to lift. Crane mobility permits a minimum amount of time for move-in, setup, and move-out. Mobile crane manufacturers have incorporated features that allow rapid setup times on site such as self decking and undecking uppers. 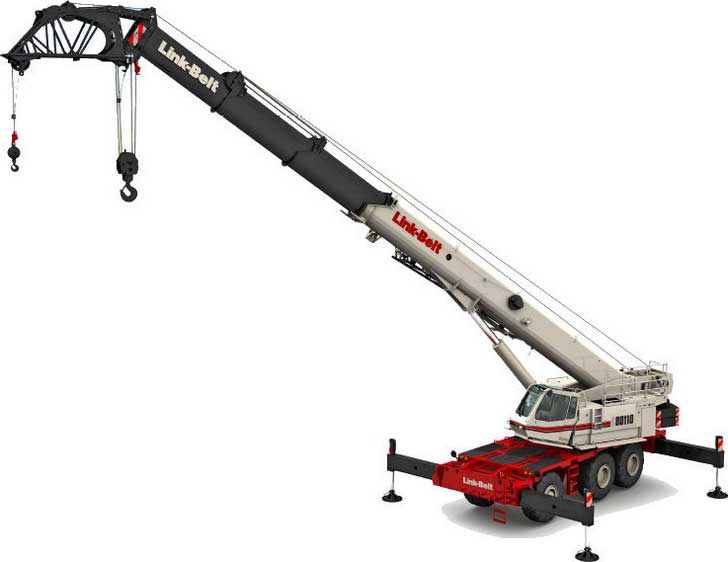 Wheel-mounted mobile cranes can also propel themselves to the jobsite. Such site-to-site moves are called transit moves. Once on the jobsite, mobile cranes can be quickly moved to wherever they are needed. The size between the largest and smallest mobile cranes differs widely. In general, size is directly proportional to mobility.

A 500-ton crawler-mounted mobile crane (not the biggest) may take several days to erect on site and to travel to the lift location. However, a 45-ton truck-mounted telescopic boom crane is ready when it arrives on site and can execute many lifts that same day.

Mobile cranes can be further classified by boom type and carrier type. Booms are either conventional lattice truss boom or telescopic boom. Virtually all telescopic boom cranes in use today use hydraulic cylinders to extend and retract the boom. Therefore, they are commonly referred to as hydraulic cranes. Each of these types of booms carries the load weight differently. 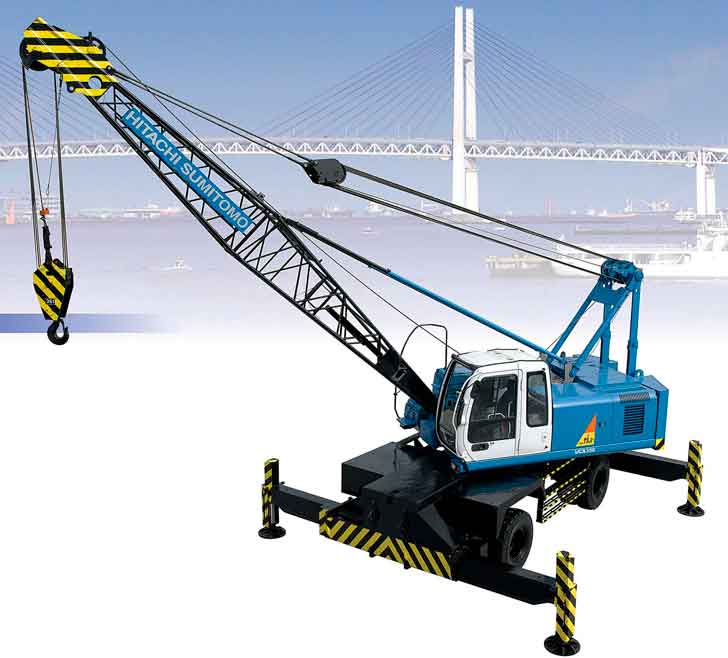 The lattice boom and its pendants, or backstays, form a triangle. The boom is a compression member, and the pendants are tension members. The structural system thus formed is very strong, rigid, and relatively light. Boom length can be increased significantly with little penalty in capacity for the added dead weight.

The lattice boom is modular, and the length between the butt section and the tip section is increased by manually inserting short boom segments known as inserts. Inserts range in length from 10 to 40 feet and install quickly with pins. This procedure, however, must be completed with the boom laying horizontally on the ground and takes one or two ironworkers and a small assist crane. 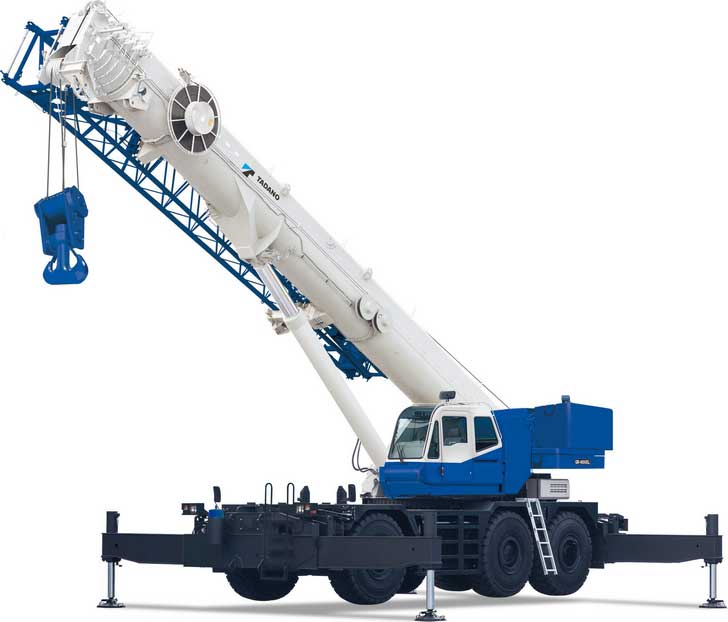 Telescopic booms, on the other hand, carry their load as flexible, cantilevered box beams, much like fishing poles. As such, they are extremely strong and have a high lift capacity when almost vertical. (For high boom angles, the internal loading is mostly compression.)

The primary advantages of the telescopic boom cranes are portability and rapid setup time. Telescopic cranes are almost always mounted on wheeled carriers. The boom segments nest inside one another and are easily retracted to roadable lengths. Once at the site, the boom can be extended to full length in a matter of minutes. To extend reach height even further, lattice boom extensions are frequently added manually to the tip of the telescopic boom.

Most European manufacturers can also provide an elaborate lattice extension called a luffing jib attachment, which essentially converts the crane into a tower crane.

Size effects play an important role in the time required for setting up a telescopic boom crane. The larger the crane, the longer the setup time required and the less mobile it is on site. Depending on local highway laws, when telescopic cranes reach the 180-ton range, additional trucks may be needed to carry counterweights.

The setup time is still significantly shorter than that required for comparable lattice boom cranes. The largest telescopic cranes (800 tons and up) require additional trucks to carry boom, outriggers, and counterweight.

A carrier is what makes a mobile crane mobile and basically consists of a special truck chassis, turntable, and wheels. Strictly speaking, crawler "carriers" are not usually referred to as carriers but rather crawler bases and consist of a structural frame called a carbody, a turntable, and crawler treads. 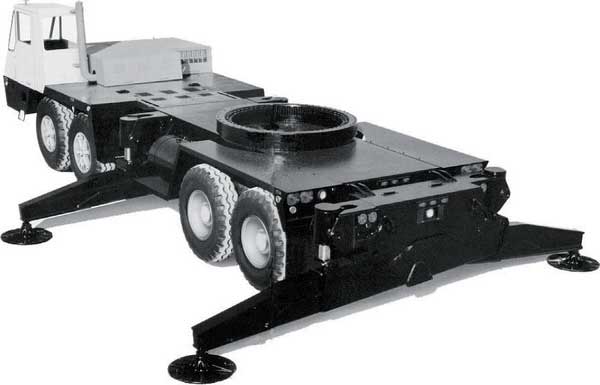 Crawler carriers, or bases, are ideally suited for rugged jobsite situations. Their large footprint provides a large ground-bearing area that is ideal for traveling along unfinished site roads or paths, especially with sandy soil conditions. Crawlers need to be trucked in and assembled on site. Smaller crawler-mounted cranes can be loaded on a truck fully assembled (excluding boom).

The largest land-based mobile cranes available today are crawler mounted. These behemoths (1,000 tons and up) are mounted on crawlers because no other carrier type would provide sufficient or economical dead load weight distribution to the ground. These large cranes are not very maneuverable and take extensive time to assemble and transport.

Wheeled carriers come in three basic types. The first is called a truck carrier and has the ability to travel long distances on public highways. Its heavy-duty suspension and power train are designed primarily for highway travel and for graded jobsite roads. This carrier type has proven to be the most diverse. It provides a base for both lattice boom and telescopic boom cranes ranging in capacities from 5 tons to well over 500 tons.

A second type of truck carrier is the rough terrain (RT). The type of carrier has four oversized wheels and is designed strictly for off-road use because it does not have a separate driver's cab. The rear axle of a rough terrain carrier has an oscillating hydraulic suspension that gives it superior off-road travel capabilities. During pick and carry operations, the rear axle must be locked.

Finally, the most technically advanced type of carrier is the all terrain (AT) carrier. As its name implies, it is suitable for traveling on both highways and ungraded jobsite roads. This feature is achieved by a fully hydraulic, computer-controlled suspension and all-wheel steering for its multiple axles. It offers high maneuverability in confined urban settings.

All truck carriers are supplied with outriggers that must be fully extended when the boom of the crane is manipulated, whether it is loaded or unloaded. When setting the out riggers, all of the tires must be completely free of contact with the ground. The tires are considered part of the counterweight and are not effective as ballast if touching the ground.

The LR 13000 is the most powerful conventional crawler crane in the world (june 2016). One of its main areas of use is in power plant construction. The ability to hoist extreme component weights is a particular requirement for the latest generation of power plants. 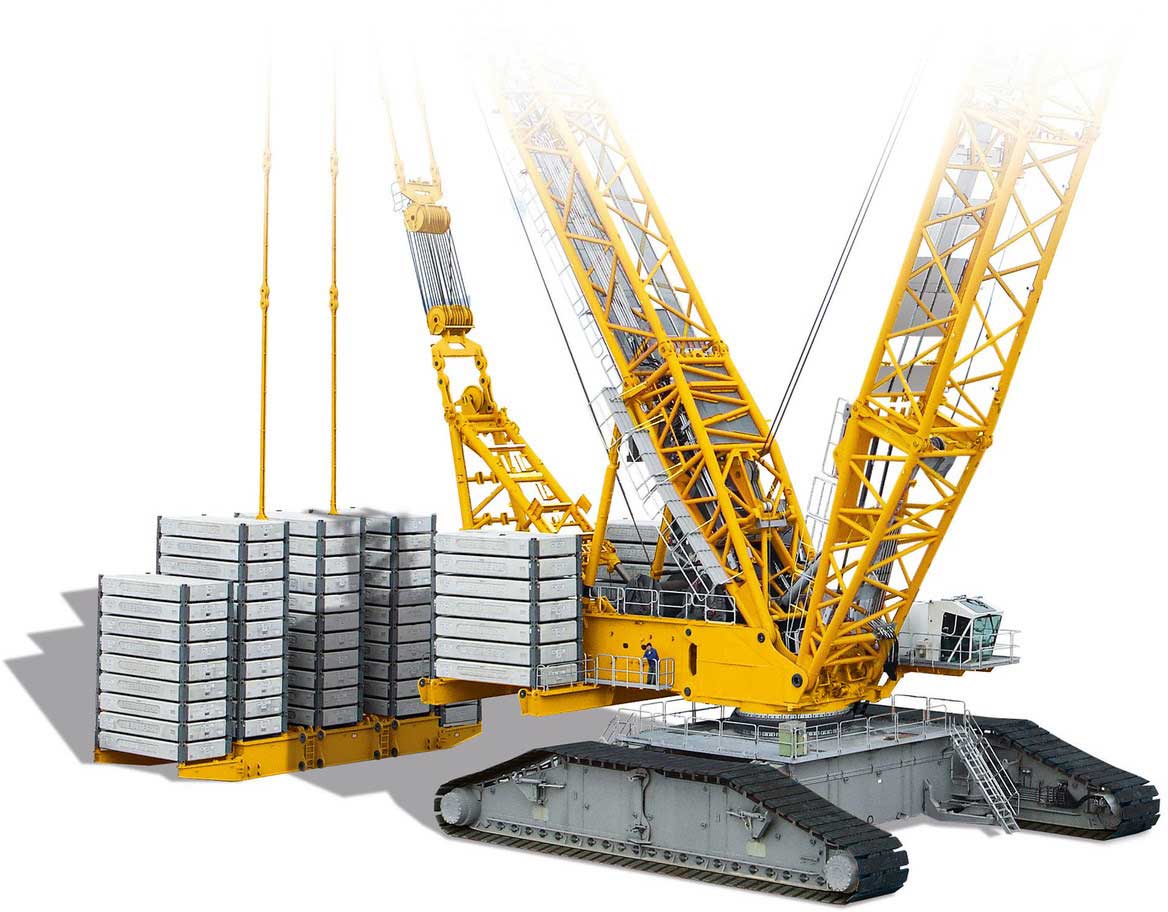 In refineries, too, there is a need to hoist industrial columns weighing 1,500 tonnes and measuring 100 m in length. The LR 13000 from Liebherr is the only crawler crane in this class which can also operate without derrick ballast. This is made possible by a slewing ring which Liebherr develops and manufactures in-house and features an extreme load capacity.

Images and text is owned by LIEBHERR

Tower cranes and derricks are examples of fixed cranes. Not all tower cranes are fixed. Fixed cranes are characterized by requiring permanent foundations. The crane cannot be moved around the jobsite without being completely dismantled and reassembled.

A fixed tower crane consists of a machinery deck (upperworks) and jib (or boom) mounted atop a slender lattice tower. This arrangement provides unobstructed boom clearance over obstacles on the ground. The long jib (or boom) of a tower crane compensates for its lack of mobility by providing lift coverage to a large area of a site while occupying very little real estate on the ground. Where air space is also limited by adjacent tall buildings, such as in urban areas or congested jobsites, a luffing boom tower crane can provide lift capabilities while being able to boom up to go around obstructions. 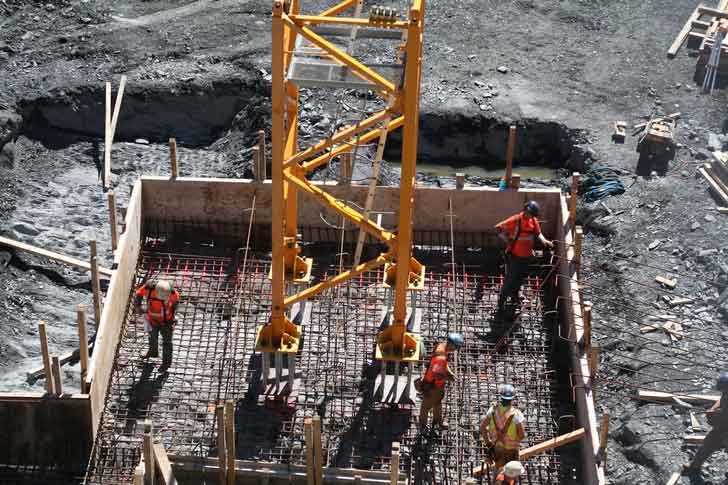 
Tower crane manufacturers have simplified the tower erection process. The lattice towers are designed to break down into roadable lengths and widths. On site, a moderately sized assist crane is required to assemble the crane and machinery deck near the ground on a section of short tower.

The tower crane is then designed to jack itself up to allow insertion of another segment of tower. This process repeats as construction progresses upward. Dismantling proceeds in the reverse order. The tower needs to be braced every 100 to 150 feet by using guys or, preferably, by bracing back to the building structure. The tower can even be incorporated inside the building structure.


Derrick..Another type of fixed crane is a derrick. The boom is typically a conventional lattice boom and the mast backstays or legs are rigid members (stifflegs) as opposed to wire rope guys. The boom and mast butts are mounted on a turntable and the stifflegs pin into fixed foundations. 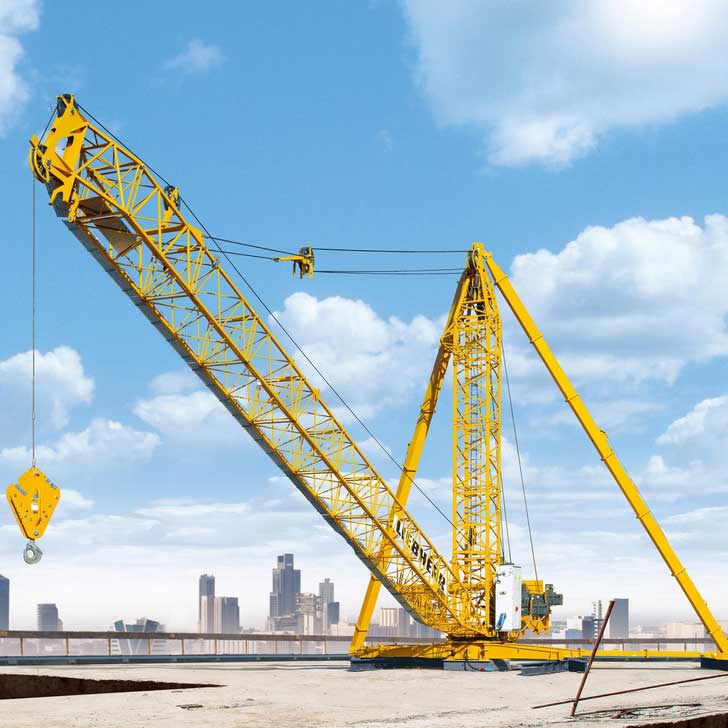 A guy derrick uses wire rope guys to tie back the top of the mast. The guys are anchored to large concrete foundations. Erecting the mast and guys can be difficult at existing facilities because guy laydown space must be provided. Guy derricks are not ideal for use on crowded sites or in existing plants. Properly tensioning the guys can be a time-consuming operation.

Small rooftop derricks offer inexpensive lifting capability in congested areas. With good planning, they are quick to install, move, and dismantle. The large stiffleg derricks and guy derricks have the advantage of large lift capacity at a very long radius. Because they are fixed to their foundation, there is no possibility of tipping.