Carbon Monoxide and the Workplace


Commonly referred to as "coal gas" or "white damp," carbon monoxide comes from the incomplete burning of gasoline, wood, coal, oil, propane gas, or anything else that contains carbon. The poisonous gas consists of just two elements, carbon and oxygen, and mixes readily with air. Poisoning occurs entirely from inhalation of the toxic compound from the air. When mixed with air, large quantities of carbon monoxide can be highly flammable and explosive, but situations resulting in such high concentrations are rare.


The primary danger with Carbon Monoxide (CO) is that it cannot be easily detected. Carbon monoxide is a colorless, odorless, tasteless gas, and thus gives its victims no advance warning.


Carbon monoxide is often referred to as a "silent killer." It is a leading cause of poisoning related deaths and illnesses worldwide.

Carbon monoxide enters the bloodstream through the lungs and combines with hemoglobin. Hemoglobin is the red pigment in the blood which carries oxygen. Although carbon monoxide follows the same path as oxygen, the poisonous gas combines with hemoglobin 210 times faster than does oxygen. This means that even though there may be ample oxygen in the surrounding atmosphere, carbon monoxide will get into the bloodstream first. High blood level concentrations of the compound will prevent sufficient amounts of oxygen from reaching the heart and brain. This can lead to suffocation, capillary hemorrhaging, permanent damage of nerve tissues and brain cells, and, possibly, death.

The initial symptoms of carbon monoxide poisoning are difficult to differentiate from other possible causes. Low-level exposure can cause headaches, dizziness, drowsiness, or nausea. Further exposure will aggravate the preliminary symptoms and can be accompanied by a rapid pulse, confusion, loss of coordination, or collapse. Finally, high exposure can lead to convulsions, coma, or death. A highly exposed victim who recovers may still suffer permanent damage of the brain or nerve tissue.


The long-term effects of low-level exposure are uncertain. Sudden exposure at high levels, however, can kill in just a few minutes. During World War II in Italy, over 500 persons were killed almost instantly when their overloaded train became stuck in a steep, icy tunnel and toxic gas from the burning coal suffocated them.


Pregnant workers may face a special danger, although low-level carbon monoxide exposure has not been definitively linked to birth defects. Cases of extreme poisoning, however, have resulted in stillbirths or nervous system defects in newborn children.


Workers with health problems, such as heart trouble, anemia, or respiratory ailments, which affect the flow of oxygen in the bloodstream, may be more readily endangered by carbon monoxide exposure than workers without such conditions. Because carbon monoxide is a by-product of cigarette smoking, the gas may adversely affect smokers more quickly than non-smokers. Carbon monoxide exposure can also contribute to pneumonia by allowing the entry of saliva or foreign matter into the respiratory tract.

Regardless of the level of exposure, practically all carbon monoxide is eliminated from the bloodstream within eight to ten hours after exposure ends. Once carbon monoxide is detected, workers in the contaminated area should be removed immediately.

Restoring breathing with artificial respiration or resuscitation equipment can treat acute poisoning. The removal of carbon monoxide from the hemoglobin is accelerated by the inhalation of oxygen. The victim should be kept lying down and warm in an area away from drafts. The after-effects of carbon monoxide poisoning should be treated by a physician and may necessitate hospitalization.

The best way to control carbon monoxide exposure is to remove it entirely from the environment. One method of doing this is to substitute non-gas producing equipment, such as battery-powered engines, for vehicles or machinery that emit carbon monoxide. Ventilation systems are another effective means of eliminating carbon monoxide from the environment. Individual operations can be enclosed and connected to a local exhaust ventilation system. Portable exhaust devices can be employed to remove gas from enclosed or underground work areas. Also, keeping equipment in proper working order will minimize potential hazards. As a last resort, workers can be provided with personal protective respiratory equipment. In addition, employers should provide affected workers with information and training regarding the potential hazards associated with carbon monoxide exposure as well as the appropriate treatment of carbon monoxide poisoning. 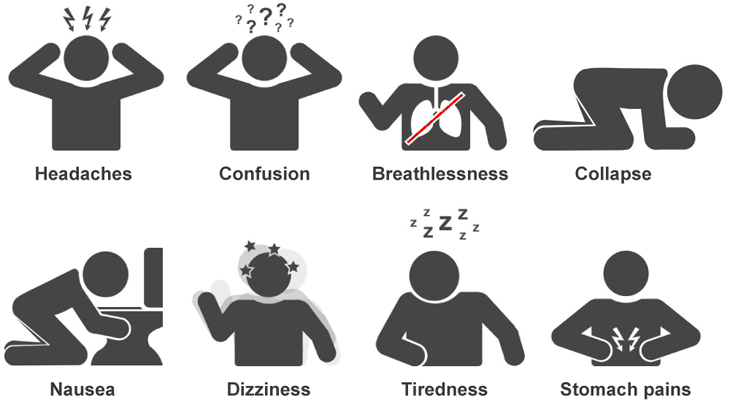 It must be remembered that the standards are written for the healthy young male and do not take into consideration personal health problems or strenuous work situations. Therefore, persons with heart trouble or respiratory ailments such as asthma or emphysema may be endangered by carbon monoxide at a lower threshold than that allowed by the standard. Any worker performing strenuous tasks that cause heavier than normal breathing will take in large quantities of carbon monoxide. Smokers, who may already have carbon monoxide in their blood from inhaled smoke, may feel adverse effects of carbon monoxide poisoning more quickly than non-smokers.