Lower and Upper Explosive Limits for Flammable Gases and Vapors


Before a fire or explosion can occur, three conditions must be met simultaneously.
A fuel (ie. combustible gas) and oxygen (air) must exist in certain proportions, along with an ignition source, such as a spark or flame. The ratio of fuel and oxygen that is required varies with each combustible gas or vapor.

The minimum concentration of a particular combustible gas or vapor necessary to support its combustion in air is defined as the Lower Explosive Limit (LEL) for that gas. Below this level, the mixture is too "lean" to burn. The maximum concentration of a gas or vapor that will burn in air is defined as the Upper Explosive Limit (UEL). Above this level, the mixture is too "rich" to burn. The range between the LEL and UEL is known as the flammable range for that gas or vapor.

The values shown in the table below are valid only for the conditions under which they were determined (usually room temperature and atmospheric pressure using a 2 inch tube with spark ignition). The flammability range of most materials expands as temperature, pressure and container diameter increase. All concentrations in percent by volume.

A Wheatstone bridge LEL sensor is simply a tiny electric stove with two burner elements. One element has a catalyst (such as platinum) and one doesn't. Both elements are heated to a temperature that normally would not support combustion. 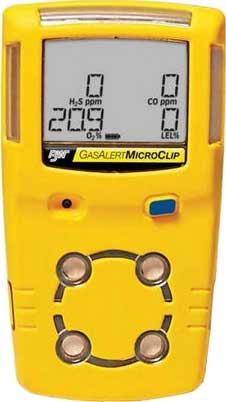 Two mechanisms affect the performance of Wheatstone bridge LEL sensors and reduce their effectiveness when applied to all but methane..


Why Not Use an LEL Monitor..

Many Volatile Organic Compounds (VOCs) are flammable and may be detected by the LEL or combustible gas sensors found in virtually every multigas monitor. However, LEL sensors are not particularly useful in measuring toxicity because they do not have enough sensitivity.


What are Some common VOCs..

VOCs are the chemical compounds that keep industry going and include..

What is meant by PPM?

Parts per million (ppm) is a commonly used unit of concentration for small values. One part per million is one part of solute per one million parts solvent or 10-6. Parts per million and other "parts per" notations (e.g., parts per billion or parts per trillion) are dimensionless quantities with no units. Preferred methods for expressing parts per million include μV/V (microvolume per volume), μL/L (microliters per liter), mg/kg (milligram per kilogram), μmol/mol (micromole per mole), and μm/m (micrometer per meter).

The "parts per" notation is used to describe dilute solutions in chemistry and engineering, but its meaning is ambiguous and it is not part of the SI system of measurement. The reason the system is ambiguous is because the concentration depends on the original unit fraction that is used. For example, comparing one milliliter of a sample to a million milliliters is different from comparing one mole to a million moles or one gram to one million grams.

The University of Minnesota provides some other analogies that may help you visualize the scale involved with PPM.

Other visualization of scale involved with PPB

140 ppm of gasoline is the lowest amount of vapor that the LEL monitor can "see." Gasoline has a TWA of 300 ppm and a STEL of 500 ppm; this does not make LEL sensors well suited for measuring gasoline vapors because they simply don't provide adequate resolution.

LEL sensors measure explosivity, not toxicity. Many VOCs are potentially toxic at levels that are well below their explosive levels and below the sensitivity of the LEL sensors.

Prior to entry of a confined space, the level of flammable gases must be below 10% of LEL.

While useful in a wide variety of applications, in some settings Wheatstone bridge LEL sensors either don't have enough sensitivity to a particular chemical, or chemicals used in the environment can render the Wheatstone bridge sensor inoperable.

In these types of circumstances, PIDs (photoionization detectors) can provide an alternative, highly accurate, and poison-free means of measuring 10% of LEL for confined space entry.

A Photo-Ionization Detector measures VOCs and other toxic gases in low concentrations from ppb (parts per billion) up to 10,000 ppm (parts per million or 1% by volume).

How does a PID Work..

A Photo Ionization Detector (PID) uses an Ultraviolet (UV) light source (Photo= light) to break down chemicals to positive and negative ions (Ionization) that can easily be counted with a Detector. Ionization occurs when a molecule absorbs the high energy UV light, which excites the molecule and results in the temporary loss of a negatively charged electron and the formation of positively charged ion.

The gas becomes electrically charged. In the Detector these charged particles produce a current that is then amplified and displayed on the meter as "ppm" (parts per million) or even in "ppb" (parts per billion).


The ions quickly recombine after the electrodes in the detector to "reform" their original molecule.

PIDs are non-destructive; they do not "burn" or permanently alter the sample gas, which allows them to be used for sample gathering.

What does a PID measure..

The largest group of compounds measured by a PID are the Organics.. compounds containing Carbon (C) atoms. These include..