Hot Taps or Hot Tapping is the ability to safely tie into a pressurized system, by drilling or cutting, while it is on stream and under pressure.

Mechanical fittings may be used for making hot taps on pipelines and mains provided they are designed for the operating pressure of the pipeline or main, and are suitable for the purpose.

There are many reasons to made a Hot Tap. While is preferred to install nozzles during a turnaround, installing a nozzle with equipment in operation is sometimes advantageous, especially if it averts a costly shut down.

Remarks before made a Hot Tap

For a hot tap, there are three key components necessary to safely drill into a pipe; the fitting, the valve, and the hot tap machine. The fitting is attached to the pipe, mostly by welding.
In many cases, the fitting is a Weldolet® where a flange is welded, or a split tee with a flanged outlet (see image above).

Onto this fitting, a valve is attached, and the hot tap machine is attached to the valve. For hot taps, new bolts, gaskets and a new valve should always be used when that components will become part of the permanent facilities and equipment.

The hot tap cutter, is a specialized type of hole saw, with a pilot bit in the middle, mounted inside of a hot tap adapter housing.

The tapping adapter will contain the pressure of the pipe system, while the pipe is being cut, it houses the cutter, and cutter holder, and bolts to the valve.

The Hot Tap is made in one continuous process, the machine is started, and the cut continues, until the cutter passes through the pipe wall, resulting in the removal of a section of pipe, known as the "coupon".

The coupon is normally retained on one or more u-wires, which are attached to the pilot bit. Once the cutter has cut through the pipe, the hot tap machine is stopped, the cutter is retracted into the hot tap adapter, and the valve is closed. 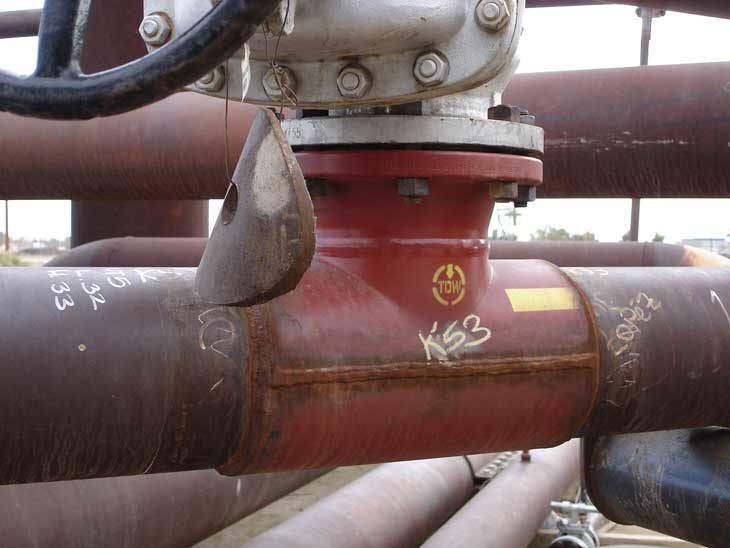 The Coupon, is the section of pipe that is removed, to establish service. It is very highly desirable to "retain" the coupon, and remove it from the pipe, and in the vast majority of hot taps, this is the case. In the image above, a split tee is applied, and the coupon is temporarily attached to the valve.

Please note, short of not performing the hot tap, there is no way to absolutely guarantee that the coupon will not be "dropped". 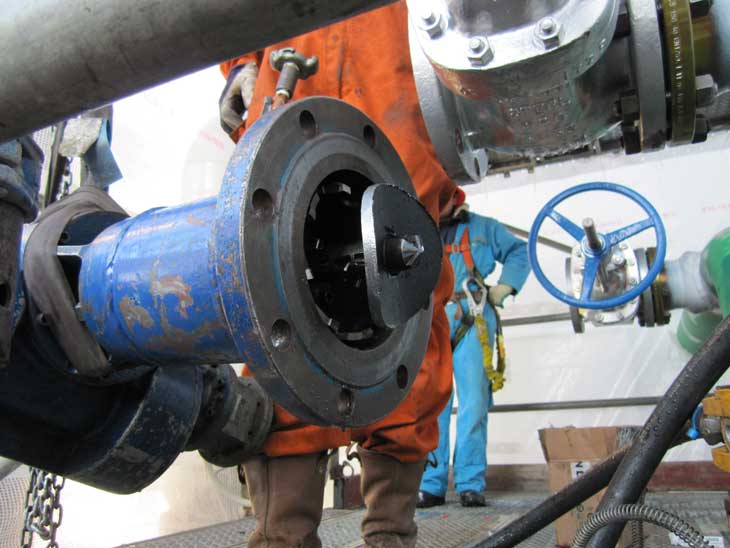 Coupon retention is mostly the "job" of the u-wires. These are wires which run through the pilot bit, and are cut and bent, so that they can fold back against the bit, into a relief area milled into the bit, and then fold out, when the pilot bit has cut through the pipe.

In almost all cases, multiple u-wires are used, to act as insurance against losing the coupon.

Line Stops, sometimes called Stopples (Stopple® is a trademark of TD Williamson Company) start with a hot tap, but are intended to stop the flow in the pipe.

Line Stops are of necessity, somewhat more complicated than normal hot taps, but they start out in much the same way. A fitting is attached to the pipe, a hot tap is performed as previously detailed. Once the hot tap has been completed, the valve is closed, then another machine, known as a line stop actuator is installed on the pipe.

The line stop actuator is used to insert a plugging head into the pipe, the most common type being a pivot head mechanism. Line stops are used to replace valves, fittings and other equipment. Once the job is done, pressure is equalized, and the line stop head is removed.

The Line Stop Fitting has a specially modified flange, which includes a special plug, that allows for removal of the valve. There are several different designs for these flanges, but they all work pretty much the same, the plug is inserted into the flange through the valve, it is securely locked in place, with the result that the pressure can be bled off of the housing and valve, the valve can then be removed, and the flange blinded off.

The Line Stop Setup includes the hot tap machine, plus an additional piece of equipment, a line stop actuator. The Line Stop Actuator can be either mechanical (screw type), or hydraulic, it is used, to place the line stop head into the line, therefore stopping the flow in the line.

Line stops often utilize special Valves, called Sandwich Valves.
Line Stops are normally performed through rental Valves, owned by the service company who performs the work, once the work is completed, the fitting will remain on the pipe, but the valve and all other equipment is removed.

A Line Stop starts out the same way as does a Hot Tap, but a larger cutter is used,.
The larger hole in the pipe, allows the line stop head to fit into the pipe.

Once the cut is made, the valve is closed the hot tap machine is removed from the line, and a line stop actuator is bolted into place.

New gaskets are always to be used for every setup, but "used" studs and nuts are often used, because this operation is a temporary operation, the valve, machine, and actuator are removed at the end of the job.

New studs, nuts, and gaskets should be used on the final completion, when a blind flange is installed outside of the completion plug.

The line stop actuator is operated, to push the plugging head (line stop head), down, into the pipe, the common pivot head, will pivot in the direction of the flow, and form a stop, thus stopping the flow in the pipe.

In order to remove the valve used for line stop operations, a completion plug is set into the line stop fitting flange (Completion Flange).

There are several different types of completion flange/plug sets, but they all operate in basically the same manner, the completion plug and flange are manufactured, so as to allow the flange, to accept and lock into place, a completion plug.

This completion plug is set below the valve, once set, pressure above the plug can be bled off, and the valve can then be removed.

Once the plug has been properly positioned, it is locked into place with the lock ring segments, this prevents plug movement, with the o-ring becoming the primary seal.

Several different types of completion plugs have been developed with metal to metal seals, in addition to the o-ring seal.