What are Rupture Disks..

A rupture disk is a device designed to function by the bursting of a pressure-retaining disk.

This assembly consists of a thin, circular membrane usually made of metal, plastic, or graphite that is firmly clamped in a disk holder. When the process reaches the bursting pressure of the disk, the disk ruptures and releases the pressure.

Rupture disks can be installed alone or in combination with other types of devices. Once blown, rupture disks do not reseat; thus, the entire contents of the upstream process equipment will be vented.

Rupture disks are commonly used in series (upstream) with a Relief valve to prevent corrosive fluids from contacting the metal parts of the valve. In addition, this combination is a reclosing system.

The burst tolerances of rupture disks are typically about ±5% for set pressures > 40 psig.

A rupture disk is a sensitive relief device designed to rupture at a pre-determined pressure and temperature. It is a means of providing protection for personnel and equipment. As such, it must be a fail-safe device. Rupture disks are used where instantaneous and full opening of a pressure relief device is required. These devices are also utilized where "zero" leak-age is required of a relief device. These devices can also be used in series as "quick opening" valves.


Primary Relief
If used for primary relief, the rupture disk is the only device utilized for pressure relief. As such, it has the advantages of being leak tight, an instantaneous response time, minimum pressure drop, lowest cost, very high re-liability, and minimum maintenance. It has the disadvantage that it must be replaced after each rupture occurrence, and allows venting until system pressure equals downstream pressure.


Secondary Relief
When used in a secondary relief capacity, the rupture disk provides a backup vent to a primary relief device, usually a Relief valve. Its purpose here is usually to provide additional protection against an unlikely but possible major event that would exceed the capacity of the primary relief device. 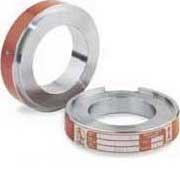 
In series with Relief valve
When used in series with a pressure Relief valve, the rupture disk is usually installed upstream of the valve. The disk will protect the valve from process media that can corrode or plug it. The disk can also act as a seal, preventing any leakage through the valve unless the disk is ruptured.

The space between the rupture disk and the pressure Relief valve must have a pressure gauge, try cock, free vent, or suitable telltale indicator. The normal configuration is an excess flow valve in combination with a pressure gauge. This arrangement is to eliminate the possibility of, or facilitate the detection of, a backpressure build up. Because a disk responds to the differential pressure across it, it will not burst at its rated pressure if a back pressure is allowed to exist in this cavity.


Other Functions
Due to the small inertia characteristics of a rupture disk, the opening time, i.e., from a closed and sealed condition to a full open condition, is less than one half of one millisecond (0.0005 sec.). This characteristic allows a rupture disk to function as a "quick opening" valve.

Some examples of rupture disks utilized in this manner are.. 1) shock tube operations; 2) seismic testing; 3) simulation of large caliber gun discharges; 4) shifting of control mechanisms from a remote location; 5) injection systems for suppression of upsets within storage vessels or systems. 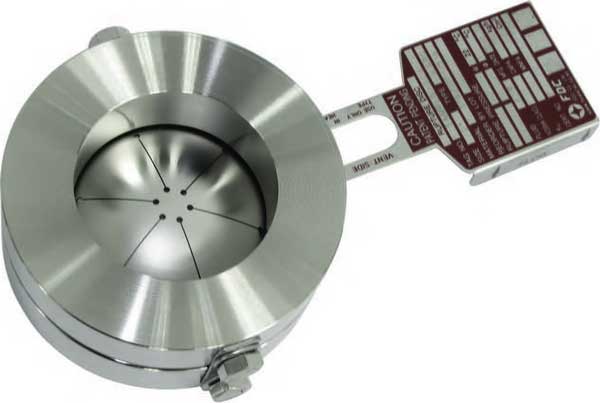