Shell is moving ahead to build the world's first floating liquefied natural gas facility (FLNG) which has the potential to revolutionise the way natural gas resources are developed. It will help to unlock vital energy resources offshore, without the need to lay pipelines and build processing plants on land.

Hundreds of engineers from across the world have combined their experience and expertise to design the world's largest floating offshore facility. It will be used to help open up new natural gas fields at sea that are currently considered too costly or difficult to develop.

Shell is a pioneer in liquefied natural gas (LNG). Chilling gas to -162° Celsius turns it into liquid and shrinks its volume by 600 times, allowing it to be shipped to far-off towns and cities where the energy is needed. 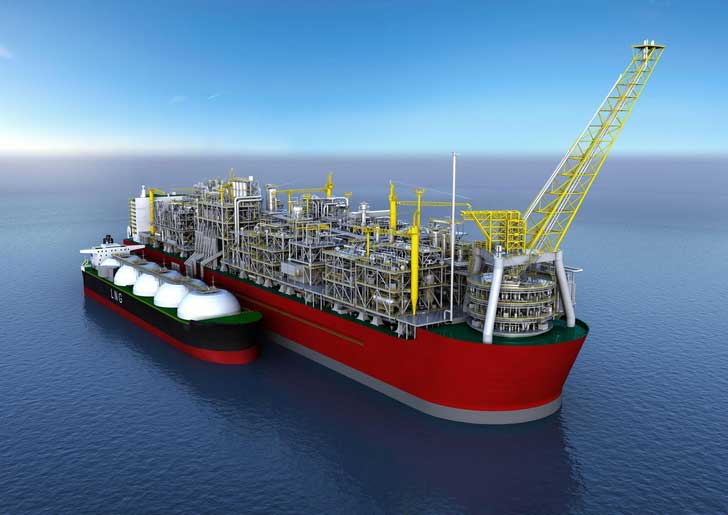 The Shell Prelude will be 488 metres long and weigh 600,000 tonnes when fully laden 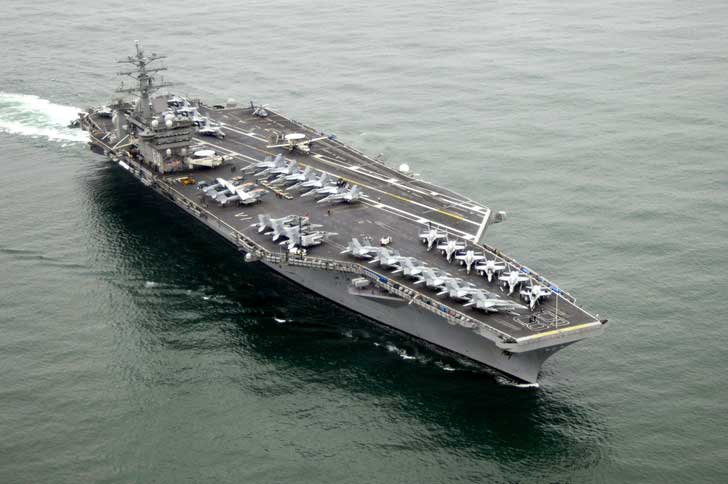 Relatively small.. The USS Nimitz weighs only a sixth of what the Prelude will weigh when loaded with gas

The first site to use FLNG will be Shell's Prelude gas field, 200 kilometres off Australia's north-west coast. Shell has progressed the Prelude FLNG project at rapid pace, with first production of LNG expected some ten years after the gas was discovered.

"This is groundbreaking technology developed by Shell," says Neil Gilmour, Shell General Manager FLNG. "It has the potential to change the way we produce natural gas." 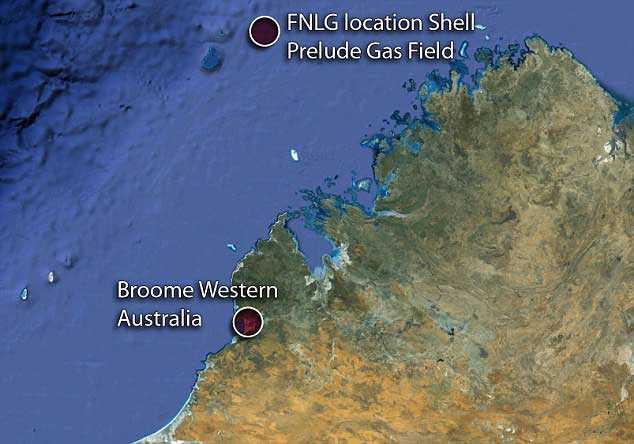 Once complete, the facility will have decks measuring 488 by 74 metres, the length of more than four soccer fields. Fully ballasted it will weigh roughly six times as much as the largest aircraft carrier.

More than 600 people around the world have spent over 1.6 million hours working on different design options for the facility. "This has never been done before," says Neil. "We had to find ways to adapt our technology for off shore."

Three 6,700-horsepower engines will sit in the rear of the facility. Two of these will operate at any one time to turn the facility out of the wind and allow LNG carriers to pull safely alongside to load. The facility's storage tanks will be below deck. They can store up to 220,000 m3 of LNG, 90,000 m3 of LPG, and 126,000 m3 of condensate. The total storage capacity is equivalent to around 175 Olympic swimming pools.

Despite its impressive proportions, the facility is one-quarter the size of an equivalent plant on land. Engineers have designed components that will stack vertically to save space. The operating plant, for example, will be placed above LNG storage tanks.

They also came up with the idea of tapping the cold of the ocean depths by pumping water to help cool the gas, avoiding the need to for extra equipment on deck.

An assembly of eight one-metre diameter pipes will extend from the facility to about 150 m below the ocean's surface. It will deliver around 50,000 m3 of cold seawater each hour. This helps to cool the gas from below the facility, saving deck space. 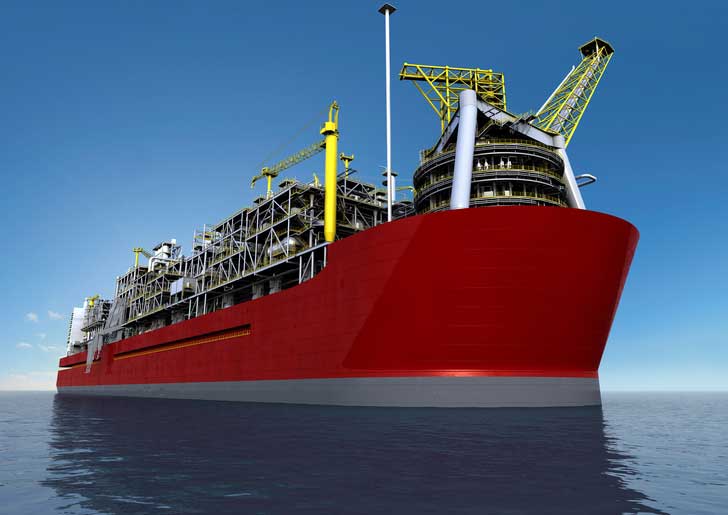 The FLNG facility is designed to operate and stay safely moored even in the most extreme weather conditions. The sheer size of the full-scale facility will help it to withstand very high winds and giant waves. In addition, it will be secured in place by one of the largest mooring systems in the world. A 105-metre high turret, spacious enough to house the Arc de Triomphe, will run through the facility. Four groups of mooring lines will anchor it to the seabed.

The system allows the facility to turn slowly in the wind - absorbing the impact of strong weather conditions - while remaining moored over the gas field. It can stay safely moored at sea even during the most powerful cyclones. This saves valuable production days that would otherwise be lost on disconnecting the facility and moving it off the field.

Three 6,700-horsepower engines will sit in the rear of the facility. Two of these will operate at any one time to turn the facility out of the wind and allow LNG carriers to pull safely alongside to load. The facility's storage tanks will be below deck. They can store up to 220,000 m3 of LNG, 90,000 m3 of LPG, and 126,000 m3 of condensate. The total storage capacity is equivalent to around 175 Olympic swimming pools.

The Prelude's unique design was developed in partnership with Technip and will be constructed at Samsung Heavy Industries in South Korea, and is on track for operations around 2017.