The advent of rolling mill technology and its development during the first half of the nineteenth century also heralded in the industrial manufacture of tube and pipe. Initially, rolled strips of sheet were formed into a circular cross section by funnel arrangements or rolls, and then butt or lap welded in the same heat (forge welding process).

Toward the end of the century, various processes became available for the manufacture of seamless tube and pipe, with production volumes rapidly increasing over a relatively short period. In spite of the application of other welding processes, the ongoing development and further improvement of the seamless techniques led to welded tube being almost completely pushed out of the market, with the result that seamless tube and pipe dominated until the Second World War.


During the subsequent period, the results of research into welding technology led to an upturn in the fortunes of the welded tube, with burgeoning development work ensuing and wide propagation of numerous tube welding processes. Currently, around two thirds of steel tube production in the world are accounted for by welding processes. Of this figure, however, about one quarter takes the form of so-called large-diameter line pipe in size ranges outside those which are economically viable in seamless tube and pipe manufacturing.

The main seamless tube manufacturing processes came into being toward the end of the nineteenth century. As patent and proprietary rights expired, the various parallel developments initially pursued became less distinct and their individual forming stages were merged into new processes. Today, the state of the art has developed to the point where preference is given to the following modern high-performance processes..

The continuous mandrel rolling process and the push bench process in the size range from approx. 21 to 178 mm outside diameter.

The multi-stand plug mill (MPM) with controlled (constrained) floating mandrel bar and the plug mill process in the size range from approx. 140 to 406 mm outside diameter.

The cross roll piercing and pilger rolling process in the size range from approx. 250 to 660 mm outside diameter. 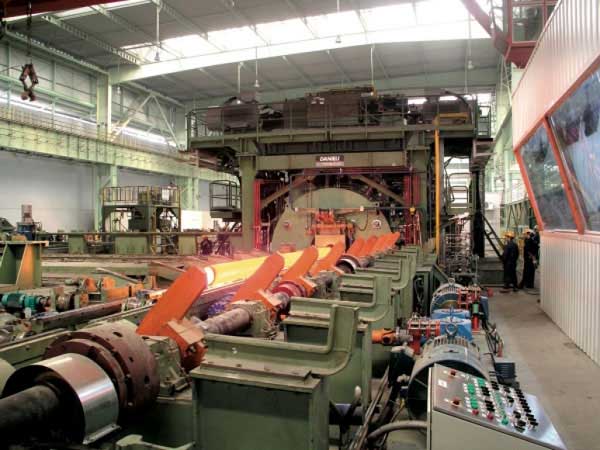 In the Mandrel Mill Process, a solid round (billet) is used. It is heated in a rotary hearth heating furnace and then pierced by a piercer. The pierced billet or hollow shell is rolled by a mandrel mill to reduce the outside diameter and wall thickness which forms a multiple length mother tube. The mother tube is reheated and further reduced to specified dimensions by the stretch reducer. The tube is then cooled, cut, straightened and subjected to finishing and inspection processes befor shipment.

* Note..Processes marked by an asterisk are conducted specification and/or customer requirements 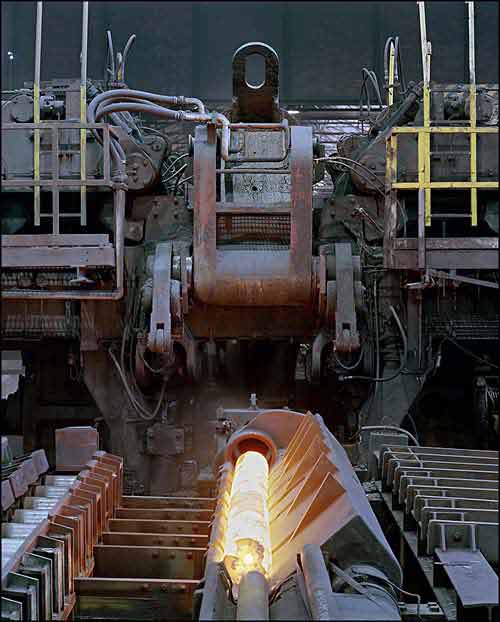 Plug Mill Process, a solid round (billet) is used. It is uniformly heated in the rotary hearth heating furnace and then pierced by a Mannesmann piercer. The pierced billet or hollow shell is rollreduced in outside diameter and wall thickness. The rolled tube simultaneously burnished inside and outside by a reeling machine. The reeled tube is then sized by a sizing mill to the specified dimensions. From this step the tube goes through the straightener. This process completes the hot working of the tube. The tube (referred to as a mother tube) after finishing and inspection, becomes a finished product.

Ever since it became possible to manufacture strip and plate, people have constantly tried to bend the material and connect its edges in order to manufacture tube and pipe. This led to the development of the oldest welding process, that of forge-welding, which goes back over 150 years.

In 1825, the British ironware merchant James Whitehouse was granted a patent for the manufacture of welded pipe. The process consisted of forging individual metal plates over a mandrel to produce an open-seam pipe, and then heating the mating edges of the open seam and welding them by pressing them together mechanically in a draw bench.

The technology evolved to the point where strip could be formed and welded in one pass in a welding furnace. The development of this butt-welding concept culminated in 1931 in the Fretz-Moon process devised by J. Moon, an American, and his German colleague Fretz.

Welding lines employing this process are still operating successfully today in the manufacture of tube up to outside diameters of approx. 114 mm. Aside from this hot pressure welding technique, in which the strip is heated in a furnace to welding temperature, several other processes were devised by the American E. Thomson between the years 1886 and 1890 enabling metals to be electrically welded. The basis for this was the property discovered by James P. Joule whereby passing an electric current through a conductor causes it to heat up due to its electrical resistance.

In 1898, the Standard Tool Company, USA, was granted a patent covering the application of electric resistance welding for tube and pipe manufacture. The production of electric resistance welded tube and pipe received a considerable boost in the United States, and much later in Germany, following the establishment of continuous hot strip rolling mills for the production of the bulk starting material necessary for large-scale manufacture. During the Second World War, an argon arc welding process was invented - again in the United States - which enabled the efficient welding of magnesium in aircraft construction.

As a consequence of this development, various gas-shielded welding processes were developed, predominantly for the production of stainless steel tube.Following the far-reaching developments which have occurred in the energy sector in the last 30 years, and the resultant construction of large-capacity long-distance pipelines, the submerged-arc welding process has gained a position of pre-eminence for the welding of line pipe of diameters upward of approx. 500 mm.

Steel strip in coil, which has been slit into the required width from wide strip, is shaped by a series of forming rolls into a multiple length shell. The longitudinal edges are continously joined by high frequency resistance/induction welding.
The weld of multiple length shell is then head treated electrically, sized and cut to specified lengths by a flying cut-off machine. The cut pipe is straightened and squared at both ends.
These operations are followed by ultrasonic inspection or hydrostatic testing.