What is Hot Bolting..

Hot Bolting is the sequential removal, cleaning and replacement of bolts in a flanged joint, while the system is pressurized. So, based on the definition itself, you can understand that hot bolting is considered a high-risk activity.


There is some confusion surrounding the phrase as there are several similar and related terms that are commonly (sometimes incorrectly) used. These include hot torquing, live tightening, single bolt replacement, live bolting, and retorquing.


While hot bolting is the more commonly used term, this can be misleading as the procedure IS NOT ALWAYS CARRIED OUT AT A HOT TEMPERATURE. Furthermore, each of the other terms mentioned above can relate to a different process - with a distinct purpose and individual risks.

For an official definition, refer to appendix B of the standard PCC-1_2019, ASME (The American Society of Mechanical Engineers). In this document hot bolting is defined as:

The sequential removal and replacement of bolts on flanged joints while the unit is under reduced operating pressure. The procedure generally consists of removing one bolt at a time in a flange, relubricating it, reinstalling it (or a new bolt), and retightening it to a specified torque. Hot bolting can be performed while the unit is online or once the unit is depressurized.

Given the dangers involved, it is vital to understand exactly what needs to be carried out. If the intention is to replace individual bolts (not just to retighten), using the more accurate term single stud replacement is recommended.

Single stud replacement is the procedure defined in the ASME description above. It is done while the pipeline is still live, often just before a maintenance shutdown. Doing this while the pipe is still active allows critical pipework connections to be disassembled quicker during the outage. The benefits are significant, with an estimated 30% increase in turnaround efficiency.

By using a Hot Bolting Clamp, bolts in working flange connections can be removed more safely. 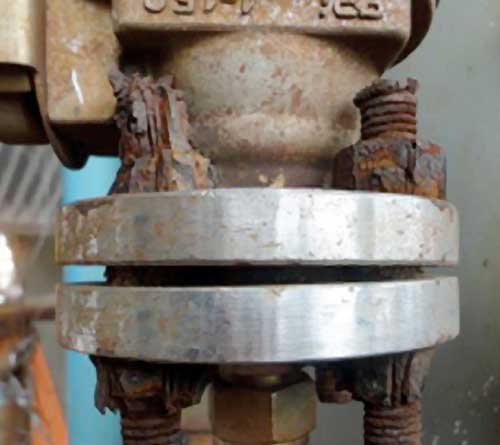 Before replacing the first bolt, position the clamp as shown in the illustrations below to secure the existing flange connection. 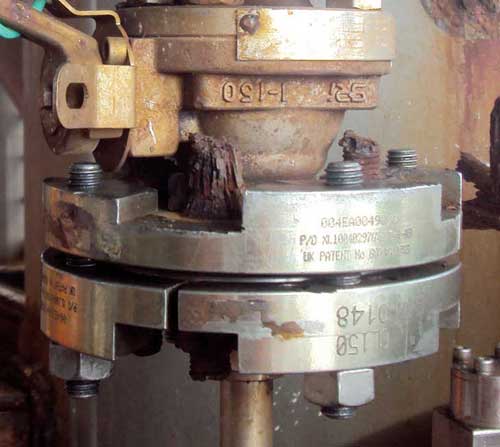 Now you can start replacing the bolts one by one 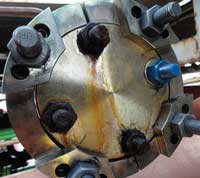 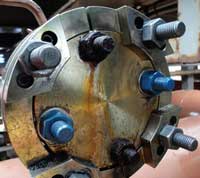 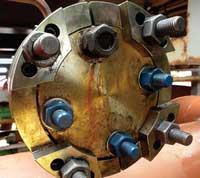 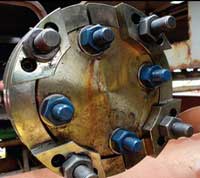 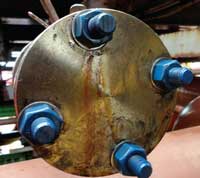 Depending on the product, pressure class and temperature, the use of a Hot Bolting clamp is certainly recommended, because a safe replacement of bolts is thereby considerably guaranteed.

As you can see in the pictures, the blue bolts are all too long. This is of course an example to better illustrate the result of hot bolting with a clamp.

In 1992 an explosion and fire caused several fatalities and destroyed much of an oil refinery in Sodegaura, Japan. During the explosion, debris weighing 1800 kg (4000 lbs) was ejected over 200m (600ft). One of the causes was identified as incomplete hot torquing (live tightening). This was due to a lack of competency of the staff, and an inadequate Job Safety Analysis.

So, you will see that hot bolting is regarded as a high-risk activity. Therefore, it should only be done by experienced and qualified personnel - and only after a thorough risk assessment and job safety analysis has been done.


Again: So, based on the definition itself, you can understand that hot bolting is considered a high-risk activity.