A Plug Valve is a quarter-turn rotational motion Valve that use a tapered or cylindrical plug to stop or start flow. In the open position, the plug-passage is in one line with the inlet and outlet ports of the Valve body. If the plug 90° is rotated from the open position, the solid part of the plug blocks the port and stops flow. Plug valves are similar to Ball valves in operation.

Plug valves are available in a nonlubricated or lubricated design and with several styles of port openings. The port in the tapered plug is generally rectangular, but they are also available with round ports and diamond ports.

Lubricated Plug valves are provided with a cavity in the middle along there axis. This cavity is closed at the bottom and fitted with a sealant-injection fitting at the top. The sealant is injected into the cavity, and a Check Valve below the injection fitting prevents the sealant from flowing in the reverse direction. The lubricant in effect becomes a structural part of the Valve, as it provides aflexible and renewable seat.

Nonlubricated Plug valves contain an elastomeric body liner or a sleeve, which is installed in the body cavity. The tapered and polished plug acts like a wedge and presses the sleeve against the body. Thus, the nonmetallic sleeve reduces the friction between the plug and the body. 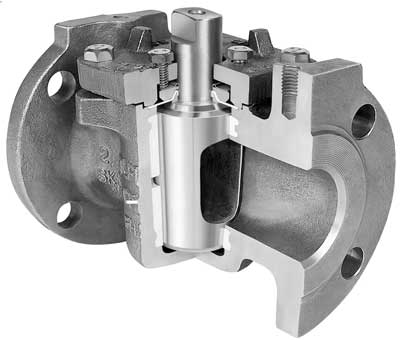 Diamond port plug has a diamond-shaped port through the plug and they are venturi restricted flow types. This design is suitable for throttling service.

A Plug Valve can be used in many different fluid services and they perform well in slurry applications. The following are some typical applications of Plug valves..

Advantages and Disadvantages of Plug valves