A bubble cap tray has riser or chimney fitted over each hole, and a cap that covers the riser. The cap is mounted so that there is a space between riser and cap to allow the passage of vapour. Vapour rises through the chimney and is directed downward by the cap, finally discharging through slots in the cap, and finally bubbling through the liquid on the tray. 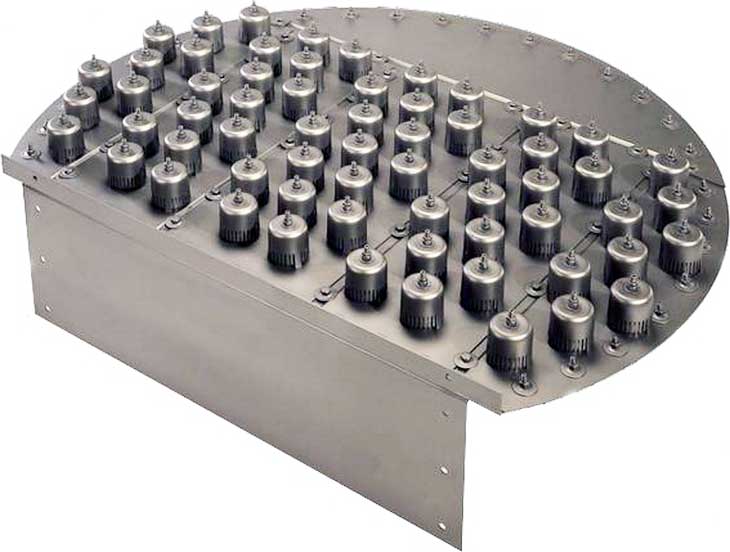 Sieve trays are simply metal plates with holes in them. Vapour passes straight upward through the liquid on the plate. The arrangement, number and size of the holes are design parameters. 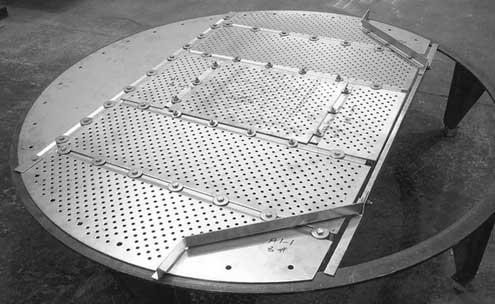 In valve trays, perforations are covered by liftable caps. Vapour flows lifts the caps, thus self creating a flow area for the passage of vapour. The lifting cap directs the vapour to flow horizontally into the liquid, thus providing better mixing than is possible in sieve trays. 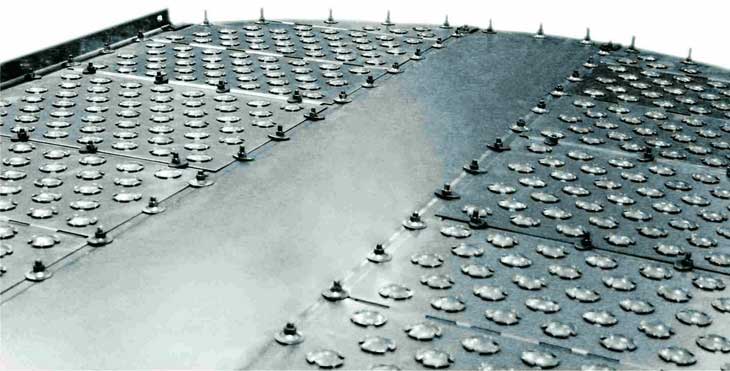 This FLEXITRAYTM valve tray is a steel sheet on which liftable valves are mounted. They are much more efficient than sieve trays. Picture of Koch-Glitsch, LP.

Liquid and Vapour Flows in a Tray Column

The image below show the direction of vapour and liquid flow across a tray, and across a column.

Each tray has 2 conduits, one on each side, called downcomer. Liquid falls through the downcomers by gravity from one tray to the one below it.

Being lighter, vapour flows up the column and is forced to pass through the liquid, via the openings on each tray. The area allowed for the passage of vapour on each tray is called the active tray area.

A tray essentially acts as a mini-column, each accomplishing a fraction of the separation task. From this we can deduce that the more trays there are, the better the degree of separation and that overall separation efficiency will depend significantly on the design of the tray. Trays are designed to maximise vapour-liquid contact by considering the

on the tray. This is because better vapour-liquid contact means better separation at each tray, translating to better column performance. Less trays will be required to achieve the same degree of separation. Attendant benefits include less energy usage and lower construction costs.

The term structured packing refers to a range of specially designed materials for use in absorption and distillation columns. Structured packings typically consist of thin corrugated metal plates or gauzes arranged in a way that they force fluids to take complicated paths through the column, thereby creating a large surface area for contact between different phases.

Structured packing is formed from corrugated sheets of perforated embossed metal or wire gauze. The result is a very open honeycomb structure with inclined flow channels giving a relatively high surface area but with very low resistance to gas flow.

The surface enhancements have been chosen to maximize liquid spreading. These characteristics tend to show significant performance benefits in low pressure and low irrigation rate applications.

A tray column that is facing throughput problems may be de-bottlenecked by replacing a section of trays with packings. This is because..


Part 1: What are Distillation Columns..