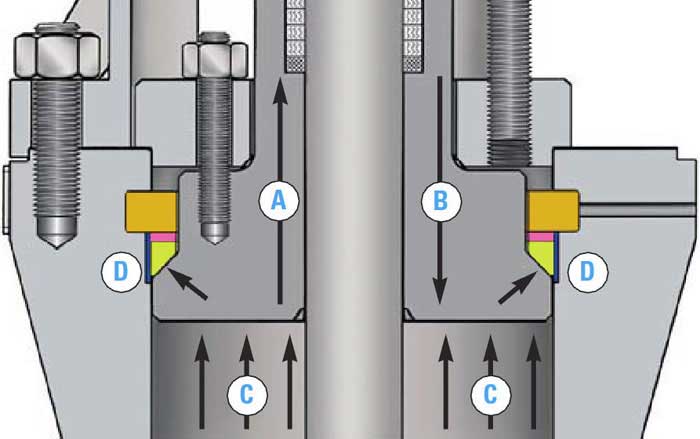 The higher the internal pressure, the greater the sealing force. Easy dismantling is made possible by dropping the Bonnet assembly into the body cavity and driving out the four-segmental thrust rings by means of a push pin.

Relying on fairly simple design principles, pressure seal Valves have proven their capability to handle increasingly demanding fossil and combined-cycle steam isolation applications, as designers continue to push boiler, HRSG, and piping system pressure/temperature envelopes. Pressure seal Valves are typically available in size ranges from 2 inches to 24 inches and ASME B16.34 pressure classes from #600 to #2500, although some manufacturers can accommodate the need for larger diameters and higher ratings for special applications.

The pressure seal design concept can be traced back to the mid-1900s, when, faced with ever increasing pressures and temperatures (primarily in power applications), Valve manufacturers began designing alternatives to the traditional bolted-Bonnet approach to sealing the body/Bonnet joint. Along with providing a higher level of pressure boundary sealing integrity, many of the pressure seal Valve designs weighed significantly less than their bolted Bonnet Valve counterparts.

To better understand the pressure seal design concept, let's contrast the body-to-Bonnet sealing mechanism between bolted Bonnets and pressure seals. Fig. 1 depicts the typical Bolted Bonnet valve. The body flange and Bonnet flange are joined by studs and nuts, with a gasket of suitable design/material inserted between the flange faces to facilitate sealing. Studs/nuts/bolts are tightened to prescribed torques in a pattern defined by the manufacturer to affect optimal sealing. However, as system pressure increases, the potential for leakage through the body/Bonnet joint also increases.

Now let's look at the pressure seal joint detailed in Fig. 2 Note the differences in the respective body/Bonnet joint configurations. Most pressure seal designs incorporate "Bonnet take-up bolts" to pull the Bonnet up and seal against the pressure seal gasket. This in turn creates a seal between the gasket and the inner dia (I.D.) of the valve body.

This design approach has distinct advantages over bolted Bonnet Valves in main steam, feedwater, turbine bypass, and other power plant systems requiring Valves that can handle the challenges inherent in high-pressure and temperature applications.
But over the years, as operating pressures/temperatures increased, and with the advent of peaking plants, this same transient system pressure that aided in sealing also played havoc with pressure seal joint integrity.

One of the primary components involved in sealing the pressure seal Valve is the gasket itself. Early pressure seal gaskets were manufactured from iron or soft steel. These gaskets were subsequently silver-plated to take advantage of the softer plating material's ability to provide a tighter seal. Due to the pressure applied during the Valve's hydrotest, a "set" (or deformation of the gasket profile) between the Bonnet and gasket was taken. Because of the inherent Bonnet take-up bolt and pressure seal joint elasticity, the potential for the Bonnet to move and break that "set" when subjected to system pressure increases/ decreases existed, with body/Bonnet joint leakage the result.

This problem could be effectively negated by utilizing the practice of "hot torquing" the Bonnet take-up bolts after system pressure and temperature equalization, but it required owner/user maintenance personnel to do so after plant startup. If this practice was not adhered to, the potential for leakage through the body/Bonnet joint existed, which could damage the pressure seal gasket, the Bonnet and/or the I.D. of the Valve body, as well as creating compounding problems and inefficiencies that the steam leakage could have on plant operations. As a result, Valve designers took several steps to address this problem.

Figure 2 shows a combination of live-loaded Bonnet take-up bolts (thus maintaining a constant load on the gasket, minimizing the potential for leakage) and the replacement of the iron/soft steel, silverplated pressure seal gasket with one made of die-formed graphite. The gasket design shown in Figure 3 can be installed in pressure seal Valves previously supplied with the traditional type gasket. The advent of graphite gaskets has further solidified the dependability and performance of the pressure seal Valve in most applications and for even daily start/stop operating cycles.

Although many manufacturers still recommend "hot torquing," the potential for leakage when this is not done is greatly diminished. The seating surfaces in pressure seal Valves, as in many power plant Valves, are subjected to, comparatively speaking, very high seating loads. Seat integrity is maintained as a function of tight machining tolerances on component parts, means of providing the requisite torque to open/close as a function of gears or actuation, and selection/ application of proper materials for seating surfaces.

Cobalt, nickel, and iron-based hardfacing alloys are utilized for optimal wear resistance of the wedge/disc and seat ring seating surfaces. Most commonly used are the CoCr-A (e.g., Stellite) materials. These materials are applied with a variety of processes, including shielded metal arc, gas metal arc, gas tungsten arc, and plasma (transferred) arc. Many pressure seal Globe Valves are designed having integral hardfaced seats, while the Gate Valve and Check Valves typically have hardfaced seat rings that are welded into the Valve body.

If you have dealt with valving for any length of time, you've probably noticed Valve manufacturers are not overly creative with the terms and vernacular used in the business. Take for example, "bolted Bonnet Valves." The body is bolted to the Bonnet to maintain system integrity. For "pressure seal Valves," system pressure aids the sealing mechanism. For "stop/Check Valves," when the Valve stem is in the closed position, flow is mechanically stopped, but when in the open position, the disc is free to act to check a reversal of flow. This same principle applies to other terminology used for design, as well as Valve types and their component parts.