Gas tungsten arc welding (GTAW), also known as Tungsten Inert Gas (TIG) welding became an overnight success in the 1940s for joining magnesium and aluminium. Using an inert gas shield instead of a slag to protect the weldpool, the process was a highly attractive replacement for gas and manual metal arc welding. TIG has played a major role in the acceptance of aluminium for high quality welding and structural applications.

In the TIG process the arc is formed between a pointed tungsten electrode and the workpiece in an inert atmosphere of argon or helium. The small intense arc provided by the pointed electrode is ideal for high quality and precision welding. Because the electrode is not consumed during welding, the welder does not have to balance the heat input from the arc as the metal is deposited from the melting electrode. When filler metal is required, it must be added separately to the weldpool.

TIG must be operated with a drooping, constant current power source - either DC or AC. A constant current power source is essential to avoid excessively high currents being drawn when the electrode is short-circuited on to the workpiece surface. This could happen either deliberately during arc starting or inadvertently during welding. If, as in MIG welding, a flat characteristic power source is used, any contact with the workpiece surface would damage the electrode tip or fuse the electrode to the workpiece surface. In DC, because arc heat is distributed approximately one-third at the cathode (negative) and two-thirds at the anode (positive), the electrode is always negative polarity to prevent overheating and melting. However, the alternative power source connection of DC electrode positive polarity has the advantage in that when the cathode is on the workpiece, the surface is cleaned of oxide contamination. For this reason, AC is used when welding materials with a tenacious surface oxide film, such as aluminium.

The welding arc can be started by scratching the surface, forming a short-circuit. It is only when the short-circuit is broken that the main welding current will flow. However, there is a risk that the electrode may stick to the surface and cause a tungsten inclusion in the weld. This risk can be minimised using the "lift arc" technique where the short-circuit is formed at a very low current level. The most common way of starting the TIG arc is to use HF (High Frequency). HF consists of high voltage sparks of several thousand volts which last for a few microseconds. The HF sparks will cause the electrode - workpiece gap to break down or ionise. Once an electron/ion cloud is formed, current can flow from the power source.

Note.. As HF generates abnormally high electromagnetic emission (EM), welders should be aware that its use can cause interference especially in electronic equipment. As EM emission can be airborne, like radio waves, or transmitted along power cables, care must be taken to avoid interference with control systems and instruments in the vicinity of welding.

HF is also important in stabilising the AC arc; in AC, electrode polarity is reversed at a frequency of about 50 times per second, causing the arc to be extinguished at each polarity change. To ensure that the arc is reignited at each reversal of polarity, HF sparks are generated across the electrode/workpiece gap to coincide with the beginning of each half-cycle. 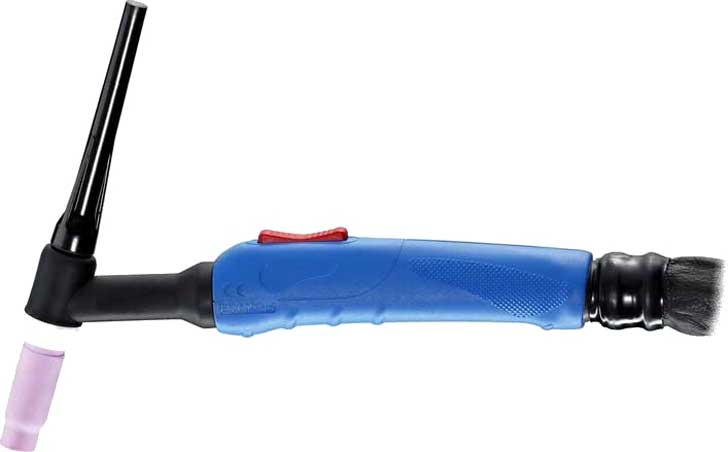 Electrodes for DC welding are normally pure tungsten with 1 to 4% thoria to improve arc ignition. Alternative additives are lanthanum oxide and cerium oxide which are claimed to give superior performance (arc starting and lower electrode consumption). It is important to select the correct electrode diameter and tip angle for the level of welding current. As a rule, the lower the current the smaller the electrode diameter and tip angle. In AC welding, as the electrode will be operating at a much higher temperature, tungsten with a zirconia addition is used to reduce electrode erosion. It should be noted that because of the large amount of heat generated at the electrode, it is difficult to maintain a pointed tip and the end of the electrode assumes a spherical or "ball" profile.

Shielding gas is selected the material being welded. The following guidelines may help..

TIG is applied in all industrial sectors but is especially suitable for high quality welding. In manual welding, the relatively small arc is ideal for thin sheet material or controlled penetration (in the root run of pipe welds). Because deposition rate can be quite low (using a separate filler rod) MMA or MIG may be preferable for thicker material and for fill passes in thick-wall pipe welds.

TIG is also widely applied in mechanised systems either autogenously or with filler wire. However, several "off the shelf" systems are available for orbital welding of pipes, used in the manufacture of chemical plant or boilers. The systems require no manipulative skill, but the operator must be well trained. Because the welder has less control over arc and weldpool behaviour, careful attention must be paid to edge preparation (machined rather than hand-prepared), joint fit-up and control of welding parameters.