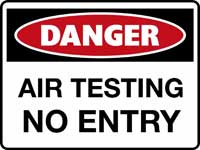 
Pneumatic testing is widely used to achieve minimum down time and economy and convenience of testing as compared to hydrostatic tests. It is also useful to detect very fine leak paths which may not be found in Hydrostatic testing.
Pneumatic pressure testing of piping and vessels at moderate-to-high test pressures or at low test pressures with high volume is more hazardous than hydrostatic pressure testing because the stored energy is much greater with compressed gases. Air, however, (like all gases) is compressible and, as a result, much more energy has to be put into the gas to raise its pressure.
In fact, at the pressure ranges normally used for testing water-piping systems 200 times more energy is stored in compressed gas compared to water at the same pressure and volume.
So, should a joint, pipe, or any other component fail under test pressure when using compressed gas, the energy can be released with deadly force!

Hazards from overpressure from a ruptured vessel or piping system

The atmospheric boiling point of LNG is approximately -160°C, any residual water left in the equipment, such as by hydraulic pressure testing, is undesirable. Pneumatic pressure testing is therefore frequently used for LNG and other piping and vessels in which moisture must be avoided. As mentioned, the stored energy of compressed gas is very high, so rupture of a piping test system during a pneumatic pressure test can release much energy. Damage due to rupture can result from shock waves, flying projectile fragments from the ruptured piping, and unrestrained movement of piping and equipment propelled by escaping gas. In fact, the cryogenic gas industries have experienced pneumatic pressure testing incidents in the past, sometimes resulting in serious injuries and major equipment damage.

To address the risks associated with pneumatic pressure testing, many companies attempt to limit the amount of stored energy in the test system to a prescribed maximum value by limiting the size of each test system. This approach is often impractical for high pressure piping of typical diameters because of the severe limitation that it places on the size of each test system. Consequently, this approach may result in an unreasonably large number of test systems. Attempting to isolate and test a large number of test systems may prove to be impractical. When the approach of limiting the amount of stored energy becomes impractical, an alternative approach, such as that described herein, may offer the best option. Regardless of which approach is taken, many of the considerations outlined in this article must be taken into account to safely execute high-pressure, pneumatic pressure testing.

A variety of measures can increase the safety of pneumatic testing. Of first importance are measures to ensure the mechanical integrity of the vessels and piping systems undergoing testing. These measures include design, fabrication, and inspection methods.

It is also necessary to bar personnel from exclusion zones (an area where personnel are prohibited to enter) surrounding the vessel or piping system under test, and to conduct tests at night or on weekends when few people are in the vicinity of the test site.

Rupture of a piping system under pressure produces a blast wave.
The pneumatic pressure tests planned for the piping systems for one LNG terminal were as high as 121 barg, depending on the class and size of piping under test. Pressures this high can produce a damaging overpressure in the atmosphere within the exclusion zone due to the blast wave or shock wave that results upon rupture of a piping system under test. Lower test pressures can also present significant hazards. For example, rupture of a specific 8in pipe segment at a test pressure of 18 barg could result in a blast overpressure of 0.5 psig (0.0345 barg) at a distance of 28 m.

Overpressure can injure personnel and damage facilities. Overpressure is the localized increase in the atmospheric air pressure associated with the passage of a shock wave.

The overpressure that accompanies failure of a piping system causes harm that is a function of the magnitude and the duration of the shock wave. Typical damaging effects from overpressures are listed below.

Overpressure has the potential to affect most of the nearby area surrounding the piping under test. Therefore, the minimum exclusion zone in this work is defined as a zone within a radius beyond which the overpressure from rupture of the piping system under test will not exceed 0.5 psig (0.0345 barg).