What are Fossil Fuels..


Crude oil, natural gas and coal are fossil fuels. Fossil fuels are very precious resources because they are non-renewable (once they're used, that's it!). We can also make lots of organic chemicals from them, needed to make products such as paints, detergents, polymers (including plastics), cosmetics and some medicines.

Fossil fuels were formed from the fossillized remains of dead plants and animals that once lived millions of years ago. Oil and natural gas are the products of the deep burial and decomposition of dead plants and animals. Heat and pressure, in the absence of oxygen, transform the decomposed material into tiny pockets of gas and crude oil. The oil and gas then migrates through the pores in the rocks to eventually collect in reservoirs.
Coal comes mainly from dead plants which have been buried and compacted beneath sediments. Most coal originated as peat in ancient swamps created many millions of years ago.

What is Crude Oil..

The oil we find underground is called crude oil. Crude oil is a complex mixture of hydrocarbons - from almost solid to gaseous, with small amounts of other chemicals such as sulphur. These were produced when tiny plants and animals decayed under layers of sand and mud millions of years ago. The crude oil is useless as a mixture and must be sent to an oil refinery to be separated. Crude oils from different parts of the world, or even from different depths in the same oilfield, contain different mixtures of hydrocarbons and other compounds. This is why they vary from light coloured volatile liquids to thick, dark oils. 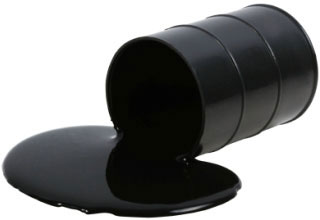 During oil recovery (especially undersea), the crude oil is often mixed with gases, water and sand and it forms an emulsion with the water. The sand will settle out and the water is removed using de-emulsifying agents. They have to be separated from the crude oil before it can be processed ready for transportation.
The dissolved gases must be to be removed, otherwise, they might come out of solution and cause a build up of pressure in a pipe or a tanker. The crude oil also contains sulphur. This has to be removed from any fractions that are going to be burnt because it forms sulphur dioxide which contributes to acid rain. So any fractions that go into fuels pass through hydrofiners to remove the sulphur.
On the Internet you can find more about Hydrocarbons and Sulphur.

What is Natural Gas..

Natural gas, in itself, might be considered an uninteresting gas - it is colorless, shapeless, and odorless in its pure form. Quite uninteresting - except that natural gas is combustible, abundant in the United States and when burned it gives off a great deal of energy and few emissions. Unlike other fossil fuels, natural gas is clean burning and emits lower levels of potentially harmful byproducts into the air. We require energy constantly, to heat our homes, cook our food, and generate our electricity. It is this need for energy that has elevated natural gas to such a level of importance in our society, and in our lives.
Natural gas is a combustible mixture of hydrocarbon gases. While natural gas is formed primarily of methane, it can also include ethane, propane, butane and pentane. The composition of natural gas can vary widely, but below is a chart outlining the typical makeup of natural gas before it is refined.

Coal is the altered remains of prehistoric vegetation that originally accumulated as plant material in swamp and peat bogs. The accumulation of silt and other sediments, together with tectonic movements in the earth's crusts buried these swamps and bogs, often to great depth.
This subjected the plant material to elevated temperatures and pressures causing physical and chemical changes in the vegetation and transforming it into coal. Initially peat, the precursor of coal, was converted into lignite or brown coal.
Over many more millions of years, the continuing effects of temperature and pressure produced more changes in the lignite, progressively increasing its maturity and transforming it into sub-bituminous coals. As further chemical and physical changes occurred these coals became harder and more mature, to be classified as bituminous or hard coals. Under the right conditions, the progressive increase in the organic maturity continued, ultimately to form anthracite.

Coal classification depends on the nature of the original vegetation, its biochemical experiences, the length of the coalification process and most importantly the depth that the coal seam was buried. The proportion of hydrogen, oxygen and carbon also decides how a coal will be classified or ranked. Coal can be further analysed by its proportion of moisture, sulphur, volatile matter, fixed carbon, ash and physical properties. Low rank coals, such as lignite and subbituminous coals are typically softer, friable materials with a dull, earthy appearance. They have high moisture levels, a low carbon content and therefore a low energy content. Higher rank coals are typically harder and stronger and often have a black vitreous lustre. Increasing rank is accompanied by a rise in the carbon and energy contents and a decrease in the moisture content of the coal.

Large coal deposits only started to be formed after the evolution of land plants in the Devonian period, some 400 million years ago. Significant accumulation of coal occurred during the Carboniferous/Permian period (350-225 million years ago) in the Southern Hemisphere and, more recently, the late Cretaceous period to early Tertiary era (approximately 100-15 million years ago) in areas as diverse as the USA, South America, Indonesia and New Zealand.

Part 6..
Facts from the Oil Industry