Nord Stream, until 2006 Northern European Gas Pipeline (NEGP) is a dual gas pipeline to transport Russian natural gas through the Baltic Sea to Germany. The construction was started on December 9, 2005 and the gas in the first conduit began to flow on November 8, 2011.

Nord Stream (former names - North Transgas and North European Gas Pipeline) is an offshore natural gas pipeline from Vyborg in Russia to Greifswald in Germany. It is owned and operated by . The name occasionally has a wider meaning, including the feeding onshore pipeline in Russia, and further connections in Western Europe. 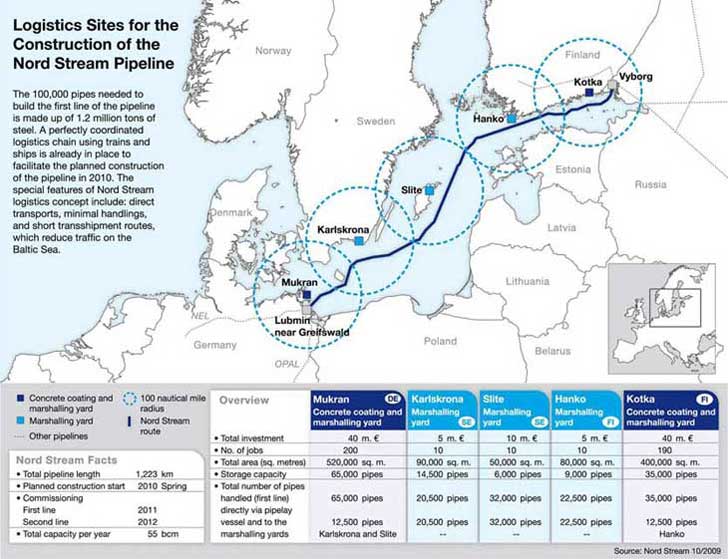 Russian onshore pipeline - Construction of the feeding pipeline in Russia (Gryazovets-Vyborg gas pipeline) began on 9 December 2005 in the town of Babayevo in Vologda Oblast. It was completed in 2010. This pipeline is operated solely by Gazprom. It is a part of the integrated gas transport network of Russia connecting existing grid in Gryazovets with the coastal compressor station at Vyborg. The length of this pipeline is 917 kilometres (570 mi), the diameter of the pipe is 1,420 millimetres (56 in), and working pressure is 100 standard atmospheres (10 MPa), which is secured by six compressor stations. The Gryazovets-Vyborg pipeline, parallel to the branch of the Northern Lights pipeline, also supplies gas to the Northwestern region of Russia (Saint Petersburg and Leningrad Oblast). A branch pipeline in Karelia will connect this feeding pipeline with Finland.


Western European pipelines - The Western European part of the project includes two transmission pipelines in Germany. The southern pipeline (OPAL pipeline) runs from Greifswald to Olbernhau near German-Czech border. It connects Nord Stream with JAGAL (connected to the Yamal-Europe pipeline), and STEGAL (connected to the Russian gas transport route via Czech and Slovak republics) transmission pipelines. The Gazelle pipeline, put into operation in January 2013, links the OPAL pipeline with South-German gas network.

The western pipeline (NEL pipeline) runs from Greifswald to Achim, where it will be connected with the Rehden-Hamburg gas pipeline. Together with the MIDAL pipeline it will create the Greifswald-Bunde connection. Further gas delivery to the United Kingdom will be made through the planned connection between Bunde and Den Helder, and from there through the offshore interconnector Balgzand-Bacton (BBL Pipeline).

Gazprom has also bought an abandoned mine (Hinrichshagen Structure) in Waren, which is planned to convert into the largest underground gas storage in Europe with capacity of 5 billion cubic metres.

For the construction period, created a logistic center in Gotland. Other interim stock yards are located in Mukran, in Kotka, in Hanko (Finland) and in Karlshamn (Sweden).